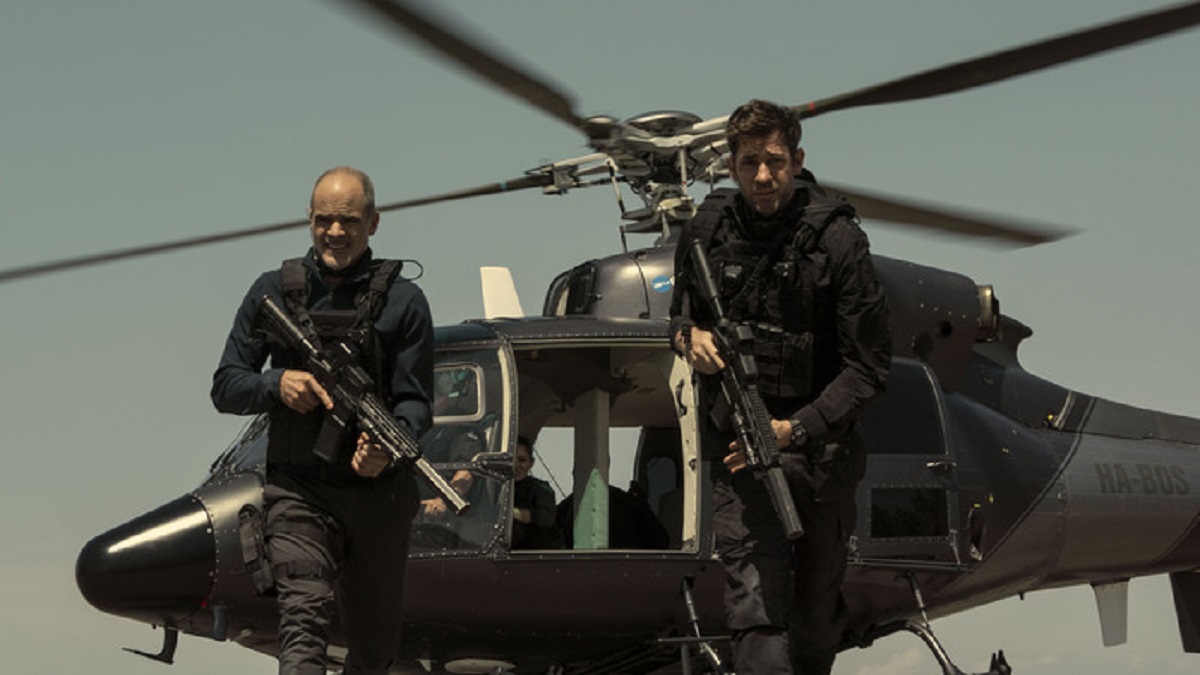 Whether it’s intended as a derogatory term or not, it can’t be denied that Prime Video is the go-to destination for what’s become dubbed “Dad TV”; unfussy, muscular seasons of television that aren’t concerned with lore, world-building, or mythology, but instead feature nothing more than manly men doing manly things while kicking ass and occasionally saving the world.

Chris Pratt’s The Terminal List, Alan Ritchson’s Reacher, Titus Welliver’s Bosch, the original run of Vikings revolving around Ragnar Lothbrok and his clan, and John Krasinski’s Jack Ryan all fit the formula to a tee, but the latter has slipped out of the conversation recently after spending three years away from our screens between its second and third outings, although that’s about to change when season 3 drops this coming Wednesday, Dec. 21.

While you’d have thought there may be an air of finality around the proceedings seeing as it’s already been confirmed that season 4 will mark the end of the road for Krasinski’s take on the Tom Clancy character (with Michael Peña stepping in to headline a spinoff series as fan favorite Ding Chavez), the penultimate eight installments tell a full story with a beginning, middle, and end, one that moves all of its pieces off the board by the finale in order to wipe the slate clean for the short-lived Marvel Cinematic Universe star’s final stand.

Following in the footsteps of Alec Baldwin, Harrison Ford, Ben Affleck, and Chris Pine – but getting a great deal more time to establish his own spin on such a well-worn figure – there’s nonetheless always been a lingering feeling that star and executive producer Krasinski has never quite been the right fit for the part.

Sure, he may be tall, handsome, and an underrated dramatic actor, but the 43 year-old finds himself in the uniquely difficult position of being a touch too old to convince as being out of his depth in the field, while not being grizzled enough to lean into the badass action heroism that’s often required of such trigger-happy TV shows.

Smartly, season 3 plays to his strengths while hiding his weaknesses, building Ryan up as being ahead of the curve up to a point, but never the smartest guy in the room. He knows more than he’s willing to share with the CIA, which is understandable when their actions continually paint them as a hindrance as opposed to a help. That forces him to thin outside of the box, color outside the lines to instead rely on his smarts and wits, along with the surreptitious assistance of always-welcome duo Wendell Pierce and Michael Kelly as James Greer and Mike November.

Betty Gabriel’s embattled rising CIA star Elizabeth Wright, Nina Hoss’s conflicted Czech Republic leader Alena Kovac, and James Cosmo’s Luka (who comes dangerously close to stealing every scene that he’s in for spoiler-related reasons we can’t go into) are all excellent, too, but the majority of the cast beyond that are mostly archetypal figures who walk, talk, look, and act exactly how you’d expect from such one-note background figures.

This time out, we begin with our title hero working as a case officer in Rome, where he receives a tip about the mysterious Sokol Project, a clandestine plan with grand designs on restoring the Soviet Union to its former glories. That’s right; the Russians are the bad guys, and they’ve got eyes for causing chaos in Eastern Europe, which adds a real-world element to the story that regularly flits between the prescient and borderline exploitative.

As is always the case with any self-respecting spy project, Ryan is forced to deal with double-crosses, duplicitous assets, a relentless sense of distrust, forces working against him from in and outside various governments that are and aren’t his own, lots of running, a couple of vehicular chases, the odd shootout or two, and much frantic calling and answering of phones while brows remain permanently furrowed.

If you couldn’t manage to derive any enjoyment out of the first two seasons, then this one isn’t going to change your mind on Jack Ryan. However, if it’s more of the same with an added layer of polish you’re looking for, then it’s eight or so hours of tightly-plotted, blockbuster-sized television that packs the required punch.

The locations are numerous and expansive, the narrative throughline becomes increasingly convoluted, the motivations become murkier, the rogue factions and double agents become increasingly difficult to keep track of, but it’s all shot, directed, executed, and delivered with such confident panache and a sense of impressive scale that it’s an easy way to spend a couple of bingeing sessions when all you’ve got on your mind is undemanding entertainment.

Jack Ryan exists in a tricky spot in the realms of star-driven TV, though, which can end up slowing it down at points. The concept takes itself too seriously to go full-on Mission: Impossible with the set pieces and far-fetched twists, but it isn’t quite willing to go the extra mile and lean into its world-weary sociopolitical subtext, either. It’s safe, which is a blessing and a curse for many a TV show, but in this case it has to be deemed as a positive because season 3 delivers exactly what the target audiences wants to see, but no more or less than that.

Maybe the fourth and final stretch will upend the formula to send Krasinski out with a bang, but as things stand, it’s hard to imagine many new converts being one over. That being said, existing Jack Ryan fans are going to find plenty to enjoy.

After a three-year hiatus from our screens, John Krasinski's CIA analyst returns for another cross-continental adventure. 'Jack Ryan' season 3 delivers pretty much exactly what you'd expect, but that's by no means a bad thing when the end result is such a slick and polished slice of episodic entertainment.