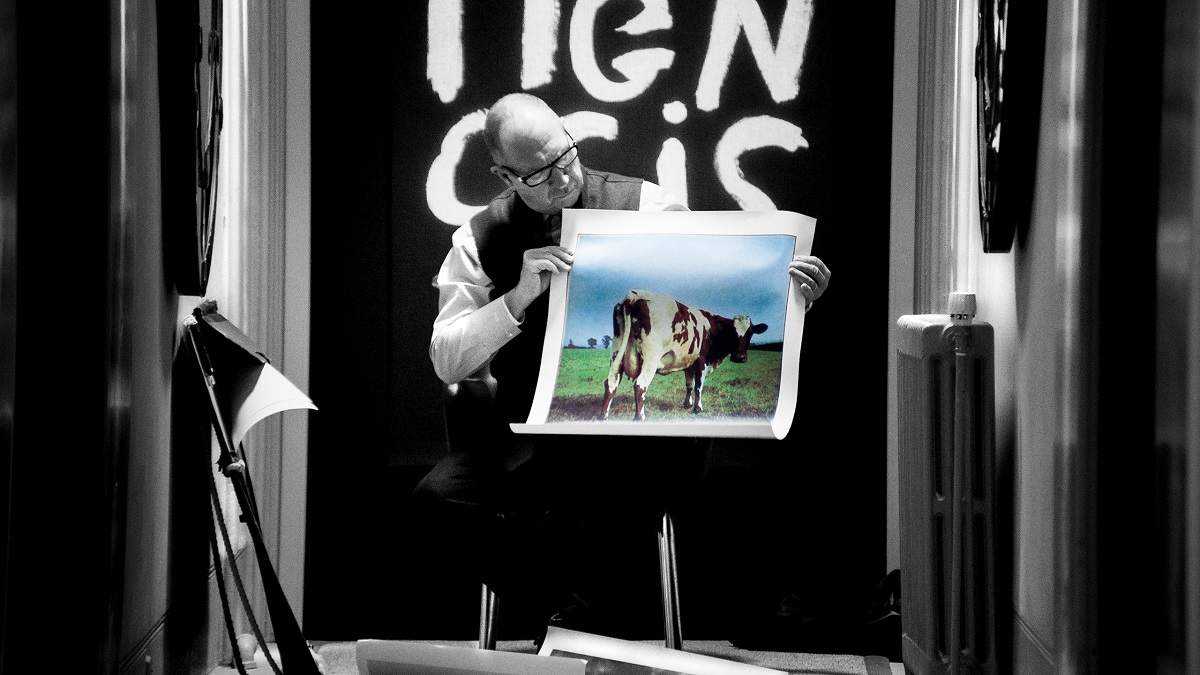 Founded by 1960s hucksters Storm Thorgerson and Aubrey “Po” Powell, Hipgnosis would go on to create some of the most iconic album cover art ever. Working with the likes of Pink Floyd, T-Rex, and 10cc amongst others – this rag tag bunch of brigands would come to define counterculture. Building their empire from a dilapidated art studio on Dean Street in London, these supposed art school graduates dropped acid and made history.

What Corbijn does, with the help of pop legends Paul McCartney, Robert Plant, and Jimmy Page – alongside a latter legend in Noel Gallagher – is let them talk shop. Through the aid of archive audio Storm Thorgerson, who died in 2013, waxes lyrical alongside these musical monoliths about how Hipgnosis evolved from the late 60s onward.

In person and just a little more lucid, Po Powell adds to the mix with recollections of those first Led Zeppelin meetings, as well as concept to creation discussions around artwork for The Dark Side Of The Moon. Through the use of comprehensive archive footage, which is woven in amongst more psychedelic imagery, a real sense of time and place starts to establish these creative mavericks amongst their contemporaries.

For fans of that era, when album covers sometimes sold the music as much as what was pressed on wax, this will prove to be a fascinating film. By applying the same fastidious attention to detail which has made his film work so engaging, Corbijn explores the music industry in a time of artwork excess as defined through Hipgnosis.

With genuine fondness and no small degree of relief, Po Powell recounts his first encounter with Storm as a teenager, when he found himself in a small semi-detached house in London sharing weed with the founding members of Pink Floyd. A band which would not only come to define rock music excess in so many ways, but at that point were just some college friends who liked spending time together.

However, through that accidental association a friendship for life was formed between Storm and Po, who used they connection to the formative Floyd in building their business. That first album cover and subsequent posters would become the foundations from which Hipgnosis would flourish. Ramshackle it might have been, but there was an overwhelming sense of vitality which infused everything they created.

Storm professed himself the ideas man, while Po excelled in photographic composition and artistic whimsy. What Squaring the Circle also does, aside from expand on the folklore legend of this rarefied outfit is document that time period. From the immergence of hallucinogenic drugs, which would influence music and artwork so radically, through to a shift in youth culture with the arrival of punk rock.

There is no denying the power of this period, when music icons were forged in stadiums yet remained accessible, rather than being locked away behind cast iron gates. Artwork of that time felt organic, while the talent spoke volumes rather than having everything go through a promotional machine. That sense of creative freedom which made anything possible, may have meant that accidents happened, but in the main, these tended to be creatively happy ones with memorable results.

The flaming businessman from Wish You Were Here, those blonde-haired twins who became so emblematic for Led Zeppelin, all came about because of Hipgnosis. They were always pushing the envelope when it came to album cover possibilities, which unfortunately meant budgets would skyrocket. Being airlifted onto mountain tops or flown out to Hawaii to photograph a sheep by the sea became a normal creative decision.

However, when the 70s made way for the 80s that bubble burst as a time of austerity took over. With that Hipgnosis suddenly found themselves out of touch with the emerging musical trends. Their friends had aged alongside them and become hugely wealthy musical dinosaurs, as seen from the perspective of these fresh faces.

What Squaring the Circle will do for audiences beyond offer them an education in music before live streaming existed, is hopefully offer a window onto a world unconcerned by public opinion. Storm, Po, and all these musicians who so fundamentally changed lives through their albums and artwork never had rule books. They tapped into a vein of originality inaccessible to everyone else and forged their path. It seems that is the problem with being a pioneer – people never see you coming.

With 'Squaring The Circle,' Anton Corbijn continues mining the musical past to celebrate his unsung heroes. In this case, he uses the documentary to explore artwork pioneers Hipgnosis, who made history with their innovative approach to album cover design.