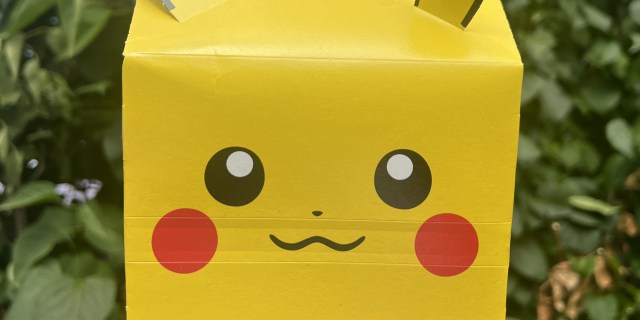 McDonald’s is a company that needs zero introduction. The fast-food restaurant is one of the most iconic brands in America. Likewise, Pokémon is one of the globe’s most known brands thanks to its anime, movies, and of course, its legendarily popular trading card game. So what happens when these two pop-culture titans collide?

McDonald’s and Pokémon fans will soon find out when a new promotion will bring the legendary pocket monsters back into McDonald’s restaurants.

What are the 2022 McDonald’s Pokémon cards?

Last year McDonald’s generated loads of buzz when they included special Pokémon cards in their kids’ meal boxes. This year the company is looking to do it again when they launch a new Pokémon Happy Meal with some new Pokémon TCG cards.

This promotion has already kicked off in the UK and Canada, but American fans will be able to join in the fun starting on August 9th, and the promotion will run until September 26th.

Each Happy Meal will come with a pack containing 4 cards, a TCG coin, and a Match Battle spinner toy. The latter toy will also change during the promotion, featuring a different Pokémon each week.

The card set includes 15 cards, however each card has a foil variant printed on “confetti holofoil”. This means the collection has 30 cards in total.

What cards are in the set?

There is a surprising amount of variety in the card set, with newer Pokémon alongside the franchise’s most iconic critters, including franchise mascot Pikachu.

All of these cards are reprints of previous ones, however they’ve been renumbered for this set, making them different from the original cards they are reprints of.

The Pokémon available are:

What Pokémon are available on the spinners/coins?

The Pokémon featured on the coins and the Match Battle spinners will change weekly. Each will feature a Pokémon that is also seen on the cards and each Pokémon will have several color variants.

Thankfully, signs found in some McDonald’s restaurants give a breakdown of what character is available during what week.

How much are the 2022 McDonald’s Pokémon cards worth?

People are curious how much these cards will be worth on the second-hand market. The recent explosion in TCG trading has caused many to dip their toes into the world of card flipping, and the excitement surrounding the 2021 set has fans curious if history will repeat itself.

Some of the cards from the UK and Canada have made their way to online sales platform, however it is hard to tell the overall value as the cards have not been launched in America yet.

It will also depend on if McDonald’s acts to stop scalping. During the 2021 promotion, many McDonald’s locations limited the number of Happy Meals one person could buy and removed the ability to purchase the cards without buying the associated meal. If most stores implement this from the start, this will heavily affect the second-hand value.

Based on current eBay listings, you should expect to pay $40-$50 for a whole set. The general price of the individual cards at the time of writing is:

These prices will obviously fluctuate over time due to the nature of the second-hand market. These early prices, however, show that the more iconic and well-known characters will command a higher price, likely because these monsters are the most attractive to both new TCG players and those who are nostalgic for the iconic franchise. so expect to pay top dollar if you want a Pikachu.