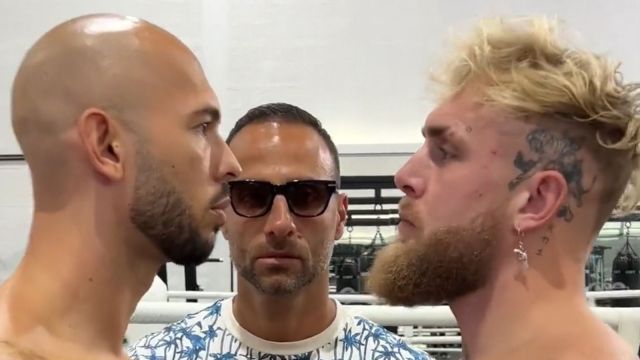 The world of influencer boxing isn’t about to rest after the recent match between Deji and Floyd Mayweather. At the end of the match, a controversial online celebrity entered the ring. Andrew Tate, known on the internet for his problematic takes on women and the “alpha grindset,” has come face-to-face with YouTuber, Jake Paul. Their face-off teased a potential future match to determine who is the most hated online content creator of them all.

Videos circulated on the internet where both influencers met face-to-face, where Paul gave a stern look at Tate. Meanwhile, the podcaster entertained Paul but was not phased by his intimidation. Instead, he gave a smile as he stared at the YouTuber at the arena and proceeded to walk away.

Does this face-off mean that there could be a future boxing match between Tate and Paul? Maybe. Paul stated in an interview that he’s more interested to face professional boxers. But unfortunately, none of them want to go in the ring. In that same interview, the camera moves to Tate, who was seen asleep throughout Paul’s interview. It seems like this is a setup for a future match.

This isn’t the first time both Paul and Tate went face-to-face to tease a potential match. Videos of both influencers staring face to face circulated across social media, days before the recent Mayweather fight. These videos hinted that something is in the works it’s up to the internet to decide if they want it or not.

So far, nothing has been announced. Yet, anything is possible since both of them are driven by money. And if there is an audience willing to pay to see two canceled, problematic, and controversial content creators fight, then there is a chance to see this influencer match come to fruition.