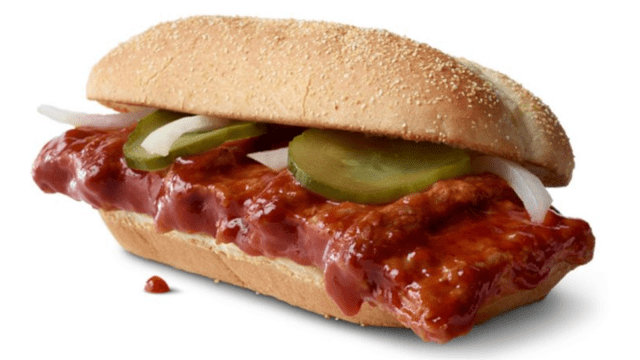 Lips are salivating as the thought of the McRib never being made again sounds just too savage. How will this world turn again? McDonald’s has been giving loyal consumers McRibs since back in the day. Teasing foodies with the on-again-off-again of a perfectly-made pork sandwich with barbecue sauce, onions, and a pickle – what are they thinking? They’re calling it the “McRib Farewell Tour” as if that’s the kind of news anyone needed to hear today.

Dropping the McRib seems like a very bad business decision. It could also be the greatest promotion strategy of all time. Maybe that’s exactly what they’re thinking – fans are going to buy them in bulk and eat them in one night. They will sell like hotcakes after church. And then, they’ll bring the glorious sandwich back next year. They have to bring them back. The world won’t be the same without them.

A possible end to an iconic sandwich?

The chance of McDonald’s bringing the McRib back is very slim. The fast food franchise has never posted a definite stance on such a decision before since Ray Kroc founded it back in 1965. So, doing it now seems like they just might be calling it quits on one of the most awesome sandwiches that ever existed.

According to McDonald’s, the sandwich is available now until November 20, 2022. That’s the day this jubilee will end. It’s a good thing there are still bacon and tacos in this world. Otherwise, no one would ever be happy again.