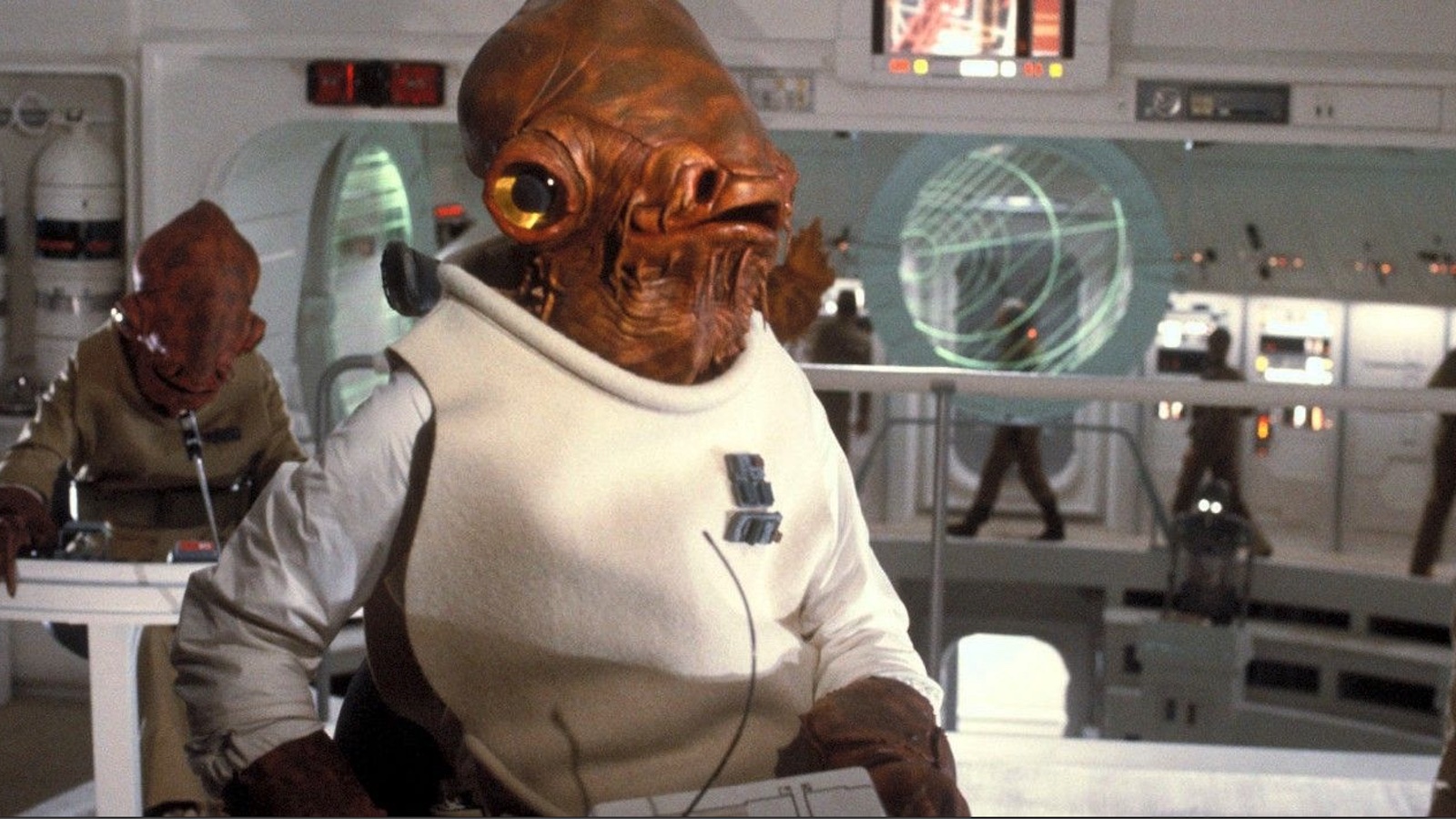 Why is this Star Wars fish-alien creature yelling “It’s a trap!” in memes all over the internet, you ask?

Among Star Wars films, Return of the Jedi (1983) might be most famous for the sheer number of memorable creatures introduced into the Star Wars saga. Some are memorably good, like Jabba the Hutt, the snarling Rancor, and the voracious Sarlacc. Others are memorably bad, like Sy Snootles and the Max Rebo band and the even dumber Joe Yowza ⏤ the bug-faced alien who joined the band in the 1997 Special Edition of ROJ. Fans have, well…mixed opinions about the Ewoks.

Among the most indisputably popular and famous of the ROJ creatures is Admiral Ackbar, the Mon Calamari warrior and strategy genius who commands the Rebel Alliance fleet during the movie’s climactic attack on the second Death Star. Who is Admiral Ackbar and why has his famous line “It’s a trap!” been meme-ified ad infinitum across the web for so long? Let’s find out.

Who are the Mon Calamari?

The Mon Calamari are an amphibian species introduced in Return of the Jedi who went on to appear throughout the Star Wars universe. They feature notably in the climactic space battle in Rogue One, when Admiral Raddus helps the Rebel fleet hold off the Empire long enough for them to steal the Death Star plans from the planet Scarif. They also appear in many Star Wars novels, comic books, and television episodes. Ackbar himself returned in Episode VII: The Force Awakens and Episode XIII: The Last Jedi and also appeared in the Clone Wars animated series.

The species hail from the planet Mon Cala, where they largely lived in underwater cities. They were loyal to the Republic during the Clone Wars, but once Emperor Palpatine came to power, he enslaved their race, as he did to so many others. This led the Mon Calamari to join the Rebel Alliance, contributing their warships and tactical brilliance to help take down the Empire and re-establish The Republic.

What is Admiral Ackbar’s role in the ROJ Death Star attack?

Even after years of new Star Wars content, the climactic three-way battle that concludes Return of the Jedi remains arguably the most exciting and emotionally satisfying sequence in all of Star Wars. Admiral Ackbar plays a prominent role, helping plan the attack, and then later leading the fleet through hyperspace to destroy the metal planet killer, only to discover that, well, “It’s a trap!”

It turns out that Han Solo, Leia Organa, Chewbacca, and their band of commandos have been thwarted down on the forest moon of Endor trying to deactivate the shield surrounding the Death Star. It’s only Admiral Ackbar’s quick thinking that prevents the fleet from slamming into the invisible shield. Once the Rebels discover that they’ve been trapped between the Death Star and a fleet of Star Destroyers, it’s largely the Admiral’s tactical brilliance (along with Lando Calrissian’s brillant piloting of the Millenium Falcon) that keeps them fighting long enough so that Han and company can get the shield down and the Rebels can penetrate the Death Star’s exterior defenses.

How did ‘It’s a trap!’ become so big online?

As with many lines of Star Wars dialogue – “I’ve got a bad feeling about this,” “A certain point of view,” “Nooooooo,” etc. – “It’s a trap!” has appeared in several Star Wars movies, not only Return of the Jedi. It also appeared in The Empire Strikes Back, when Leia screams it to Luke upon his arrival to Bespin. As such, it was often quoted even before advent of the internet (yes, there was such a time!).

According to the “Know your Meme” site, “It’s a trap!” began to spread online in the early 2000s. In general, the phrase is meant as a funny reference to warn someone of potential deception, or a bait-and-switch, with the added fun of being a Star Wars reference for those in the know. Many variations began to appear, such as “It’s a tarp!,” which depicted Admiral Ackbar holding a blue tarp and was sometimes used to reference President Obama’s 2008 TARP program.

By 2009, the phrase and its use in memes was so ubiquitous that it earned its own entry in the Urban Dictionary. In 2010, Family Guy even used it as the title for its Return of the Jedi spoof.

We’d be remiss if we didn’t point out the sometimes transphobic use of the phrase, when it is used as a “warning” (jokingly or not) that a transgender person is trying to deceive someone about their gender identity. However, the many fun, funny, celebratory, and wholesome uses of the phrase far outnumber the nasty ones, and those are the ones we choose to focus on here.

What was Admiral Ackbar’s fate?

Despite the heavy losses the Rebels suffered during the attack on the second Death Star, Admiral Ackbar and his faithful Mon Calamari crew survived, and Ackbar was still with the ragtag band as they transformed into the Resistance in the sequel trilogy. Sadly, the brave and dedicated fleet commander met his end during the prolonged First Order assault on the remaining Resistance fleet in The Last Jedi.

Fans have voiced their discontent over what they felt was an undistinguished death for the beloved character, who was blown into space when TIE Fighters blasted apart his ship and died off-screen. Both the actor who played the admiral, Tim Rose, and The Last Jedi editor Bob Ducsay have gone on record as saying that the fan favorite character deserved better.

One thing remains likely, however. Despite a disappointing death, Admiral Ackbar and his immortal line are likely to live long and prosper in “It’s a trap!” memes across the web.