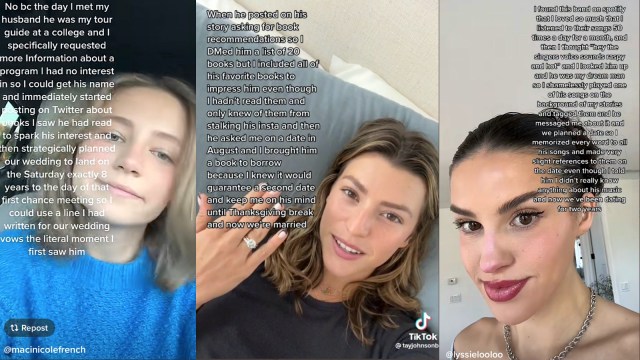 If there’s ever a place to share relatable experiences with like-minded people, it’s TikTok. The platform is host to countless trends and challenges, many of which are either outrageous, absurd, or downright hysterical.

Following the release of Taylor Swift’s highly-anticipated 10th studio album, Midnights, Swifties all around the world took to TikTok to share their experiences winning over their partners. See, the last song on Swift’s album, “Mastermind,” is all about how she presumably won over her longtime boyfriend, Joe Alwyn, hook, line, and sinker.

Ever the storyteller, Swift goes into detail about how she and Alwyn wound up “in the same room at the same time.”

“What if I told you none of it was accidental / And the first night that you saw me, nothing was gonna stop me? / I laid the groundwork, and then, just like clockwork / The dominoes cascaded in a line”

Not long after, a curious little trend started popping up all over Twitter. Hopeless romantics like Swift started posting their own mastermind stories, and, needless to say, Swift, herself would be proud.

TikTok user @lyssielooloo recalls how she landed her boyfriend, which involved nonchalantly posting a video to her social media story with his song playing in the background (he was in a band) and tagging him. Lo and behold, she received a message. Then a date, to which she arrived with his entire catalog of lyrics memorized and offhandedly made references throughout the date. Bam, sold. They’ve been together for two years.

Another user, @macinicolefrenh detailed her mastermind experience which took place at her college orientation. He was her tour guide, and you better believe she asked as many questions as possible to draw as much information out of him as she could. Then, discreetly, she started making references to books she knew he liked, which, as you can imagine, caught his attention. Here’s the real kicker (Swift would be proud): She planned their wedding day exactly eight years to the day they met “so I could use a line I had written for our wedding vows the literal moment I first saw him.”

Finally, TikTok user @tayjohnsonb describes her journey to the wedding altar, once again relying on books to win over her man (clearly, books are the secret sauce here). She explains that she messaged him a list of 20 book recommendations, making sure to include all of his favorites (a little suspicious if you ask us, but we digress). Then, on their first date, she loaned him a book, knowing full well it would guarantee her a second date, which it did. And a third, fourth, fifth, and so on. They’re now married.

If “Mastermind” taught us anything, it’s that people will do anything to get the lover they want. You can roll your eyes, cringe with discomfort, or backpedal in fear, but let’s be honest, we’re all a bit of a mastermind when you think about it. You’re telling us you’ve never tried to be two steps ahead of someone? Sure you have. Now you know you’re not the only one. Thanks, Taylor.