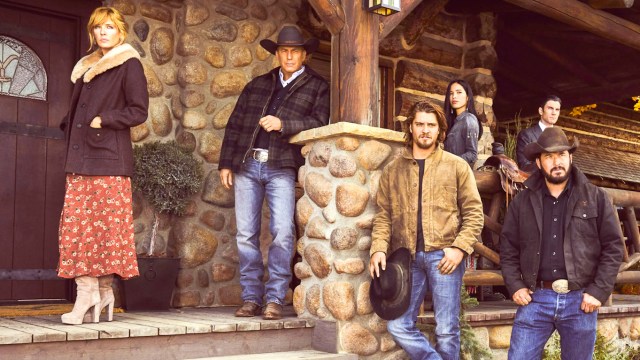 Image via Paramount
Review of:

Paramount’s number one series, Yellowstone, is treating fans to the banquet we all really want this holiday week with the Every Episode Feast kicking off on Thanksgiving Day. With four exhilarating seasons under its belt, Yellowstone is the kind of series that hooks you from the very beginning and introduces you to a world you would never have expected.

The Dutton family is full of characters as multifaceted as the storyline itself and easy to root for or hate, depending on the scene. Showrunner Taylor Sheridan is phenomenally talented at crafting characters that exist in a grey area, not all good or all bad. From Beth and Jamie Dutton to the late Sheriff Haskell, there’s much to uncover with each new episode. The all-star cast that brings Sheridan’s story to life seems to have been perfectly chosen for their roles in the series, almost as if they were crafted specifically for them.

Kevin Costner fits the bill as John Dutton, with Wes Bentley pulling out all of the stops as he’s tasked with playing the necessary evil of the Dutton family, Jamie. Kelly Reilly shines as the powerhouse that is Beth Dutton, and Luke Grimes embodies the strong but vulnerable Kayce in every way. Everyone in the series is dedicated to their roles.

So as you cook your meals this Thanksgiving, eating full plates with loved ones before spending hours in and out of sleep, don’t forget to turn to Paramount and let everyone’s favorite cowboy drama give you the feast you’ve been waiting for.

With several episodes to enjoy, we’ve put together a list of our favorites you’ll want to watch during the marathon. These Yellowstone episodes have everything from family secrets to moments of bravery. Enjoy.

Daybreak – season one, episode one

You can’t watch Yellowstone without tuning into the series’ first episode and realizing the weight John Dutton has on his shoulders within the first few moments. After a tragic accident unfolds, we see John have to perform a mercy killing on a horse, and within moments he’s telling viewers that there is more to the story than we might have imagined. The synopsis for the episode reads as follows:

The point here is to lay the groundwork and entice fans to come back for more, and “Daybreak” certainly did just that.

Another stand-out episode of the series is “No Good Horses,” in which we see where a lot of the heartache of the Dutton family comes from, the untimely death of wife and mother, Evelyn. Her tragic fall of a horse is made worse when audiences see that she blames her daughter, Beth, for her death. We also see the frayed fabric in the relationship between Jamie and Beth. The synopsis for this episode reads as follows:

“The Duttons deal with a painful family anniversary. Kayce saves a young girl from danger. Jamie and Beth plan their respective political careers. Rainwater makes an ominous threat to the Dutton legacy.”

That ominous threat to the Dutton legacy by Chief Thomas Rainwater is also an essential part of the puzzle, as we realize that many people want what John Dutton has, and they’ll stop at nothing to get it.

Season one certainly had more can’t-miss episodes, but the second season also packed a lot of emotion and story into each episode. The Beck brothers set out to destroy an integral part of the Dutton family, and as Beth is attacked as a way to send a message to John, the only thing that saves her are three crucial words from Rip. The official synopsis for the episode reads as follows:

“Tensions escalate as the Beck brothers become frustrated by the Duttons’ unwillingness to play ball; Jamie looks for a fresh start at the ranch.”

Upon learning of Beth’s attack, Kayce also uses the Beck brother’s minions (what’s left of them, anyway) to make a statement to anyone who might attempt a similar attack on his family.

Of course, killing the men who attacked Beth wasn’t payment enough for the Dutton family. In “Enemies by Monday,” revenge is still on the menu. The Beck brothers won’t be left to walk around after they hurt the family in such a detrimental way, but if you expected Beth Dutton to stay down, you’re wrong. When Monica is humiliated at a boutique in town, she knows just who to call to help save the day, and when Beth shows up, she’s ready to work all of her anger out on the store owner, but Monica steps in and calls her off. The moment is when they realize something in the other that stands out to them. It might not be the loving sister-in-law relationship we all hope for, but they have found common ground to stand upon.

“The Duttons gear up for a final fight with the Becks; Beth helps Monica out of an uncomfortable situation.”

In an even more heartbreaking turn of events, by the end of “Enemies By Monday,” we have no idea where Tate Dutton is, and when we find out, it’s a worse fate than we could have imagined.

In “Cowboys and Dreamers,” we discover the reason for the tumultuous relationship between a pair of Dutton siblings, and it’s more heartbreaking than we could have imagined. The episode also shines a light on the injustices handed out to women who use a clinic for Native Americans and the painful choice they’re forced to make. Yellowstone highlights many current issues for both ranchers and the Native American community, and this is just one circumstance where we see the stark difference between them. The official synopsis for the episode reads as follows:

“The reason for Beth and Jamie’s toxic relationship is revealed. Kayce bends the rules to help a family in need. Rip and the boys get into a confrontation with two men from John’s past.”

The confrontation mentioned is certainly a doozy, but they always are when you hear the words “Rip and the boys.”

“The Beating” is an episode full of ups and downs for everyone at the ranch. From a painful ride in the truck for Rip to Jamie discovering a well-kept family secret, emotions are high for everyone. John fears that he’s made some bad choices, while Jamie questions everything he’s ever known.

“Kayce searches for answers following a theft on the ranch, Jamie learns a shocking family secret, John issues a warning, and Beth takes matters into her own hands.”

There is a beautiful silver lining in this episode, and it comes when Rip first storms past Beth as she sits on the porch waiting for him. It takes him two beers to sense that she’s waiting to ask him something, and it’s something big. Beth pledges her love to Rip in this episode and asks him to marry her. Be still our beating hearts.

The entire episode is a doozy here, but we have to focus on the final moments where everything for our favorite television family hangs in the balance. John Dutton is gunned down on the side of the road as he attempts to help a woman change her tire while Beth’s office is blown up. Kayce is sitting in his office when people storm in and start shooting, and Monica and Tate are also met with intruders when Kayce tells them to run for safety on the ranch.

“John sits down at the negotiating table with former friends and foes. As the battle for the future of the Yellowstone heats up, nothing will ever be the same.”

Perhaps the episode’s most heartbreaking moment is that we had to wait for a new season to find out what happened to our favorite characters and who survived.

Half the Money – season four, episode one

When season four made its entrance, we learned who survived the attacks on the Dutton family; we also learned that they weren’t over. Fearing he’d die on the road, John wrote a message to whoever found him in his own blood. Rip Wheeler happened upon his body and tried to rush him to safety while telling Kayce what happened.

“The coordinated attack on the Duttons continues as everyone searches for answers on who is responsible; Rip delivers on a promise.”

Luckily everyone made it out alive, but not everyone was in good shape physically or emotionally. As the episode went on, we learned that the attacks on everyone left deeper scars than we’d ever be able to see.

We see Jimmy as a working and learning cowboy at the 6666 Ranch in “Keep The Wolves Close,” and as the episode hints that we should keep our enemies close, we also see bonds continuing to form that are anything but dangerous. Mo helps Kayce with horses, Beth helps Carter learn a lesson, and even Walker and Lloyd find a truce when the latter brings a new guitar to the man he wanted dead just days earlier.

“John is put in an awkward position by Gov. Perry; Carter works to earn back Beth’s trust; Jamie is in for a big surprise.”

Everyone seems to be learning that friends are worth more than enemies, even if it’s a lesson that’s hard learned. Another hard-learned lesson? Governor Lynelle Perry isn’t announcing that she wants to endorse Jamie for Governor of Montana; she’s choosing his father instead. Yikes.

Grass on the Streets and Weeds on the Rooftops – season four, episode 10

A Dutton wedding happens in the season four finale of Yellowstone, and it’s everything fans had been hoping for. When Beth and Rip finally tie the knot, it’s in a small ceremony at the Yellowstone Dutton Ranch. John, Lloyd, and Carter are the only ones in attendance — and the priest Beth kid…er…adult-napped to get him there.

“To the Duttons, family is everything; however, newfound truths threaten that bond. Jimmy comes home and has important decisions to make. Beth takes family matters into her own hands.”

We also see Jimmy make a decision that hurts the heart of everyone at the Yellowstone, but the silver lining as viewers is that we know we’ve not seen the last of him yet.

This weekend, you can see the aforementioned episodes and everything you’ve missed on Yellowstone during the “Every Episode Ever Feast,” starting Thursday at 11am ET on the Paramount network. There’s no better-looking banquet around, trust us!