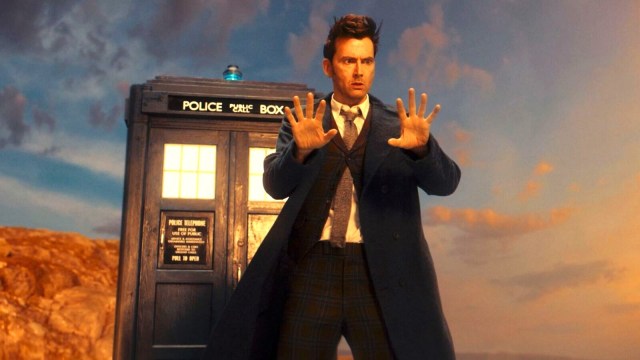 Ncuti Gatwa might be our next full-time Doctor, but for the next year or so, David Tennant is once again occupying the TARDIS. Jodie Whittaker’s final Doctor Who episode surprised Whovians everywhere with its shocking regeneration sequence, which saw the Thirteenth Doctor reborn into the body of the Tenth Doctor, allowing Tennant to return to what is still his most beloved role.

Unfortunately, we’ve got a long wait until we see Tennant back in action, with his trilogy of specials not hitting screens until November 2023. But ahead of the immortal sci-fi series’ 60th anniversary, why not keep up the hype by revisiting some of the finest episodes from the Good Omens star’s first go-around as the Time Lord?

Tennant’s era, stretching from 2005 to 2010, stands as one of the best in all Whoniverse history, so there are many standout hours from his three seasons plus change in the lead. For those wishing to take a whistle-stop tour of Tennant’s greatest hits to celebrate his return, here are 10 of the Tenth Doctor’s most terrific episodes.

First of all, it only makes sense to go back to where it all began and revisit Tennant’s very first episode, 2005’s festive special “The Christmas Invasion.” The new Doctor is actually comatose for most of the special, as he recovers from his regeneration, but the final fifteen minutes do a terrific job of showing off Tennant’s abundance of charisma and the mercurial personality of his take on the Time Lord.

‘The Girl in the Fireplace’

Ten is often considered the most romantic of Doctors, and that side of him is on full display in 2006’s standout episode, “The Girl in the Fireplace,” in which the Doctor falls in love with Madame de Pompadour (Tennant’s then-partner Sophia Myles), although the pair only meet a handful of times across the 18th century French aristocrat’s lifetime – essentially Doctor Who‘s twist on The Time Traveler’s Wife.

Season two’s apocalyptic two-parter is easily one of the most iconic of all Tennant’s Who episodes, as it begins with the villain team-up fans had been waiting decades for — a battle between the Daleks and the Cybermen — and then ends with the heartbreaking departure of Billie Piper’s Rose Tyler — Ten’s one true love — after she’s forced to relocate to another universe. They don’t do companion exits like this anymore.

This unique and incredibly moving two-parter from season three may just sport Tennant’s finest-ever performance in the series. Fleeing from a family of aliens who wish to feast on his Time Lord lifespan, the Doctor transforms himself into a human man — John Smith — a teacher at an English boarding school in 1913. Tennant is terrific as the Doctor’s alter ego who could not be more different from his other self.

Let’s not forget that, in addition to being a dramatic powerhouse, Tennant is also a pitch-perfect comedy actor, too – something that’s never better portrayed than in this hilarious season four opener, in which the Tenth Doctor reunites with Catherine Tate’s Donna Noble. Seeing as Tate is likewise back for next year’s 60th birthday, fans need to remind themselves of the ultimate pairing that was the Doctor and Donna.

“Blink” didn’t find its way onto this list as Tennant is hardly in it, but this other scary episode is a much better showcase for his talents. Trapped in a shuttle bus on an uninhabitable planet, the Doctor finds himself out of his depth when a formless entity possesses a passenger and eerily copies everyone’s speech. A fantastic example of how a bunch of people stuck in one location can still make great TV.

On the other end of the stakes scale we have this mega-sized season four finale, which brings together all the Doctor’s companions and the stars of spinoffs Torchwood and The Sarah Jane Adventures to battle an invasion of the Daleks, led by their evil creator, Davros. What’s more, we have two Tennants for the price of one, thanks to a regeneration gone awry. Doctor Who has never been more like Marvel.

‘The Waters of Mars’

Folks love the Tenth Doctor for his lark-about nature and romantic tendencies, but the darker side of his persona is often overlooked. His penultimate story is a brilliant portrayal of what happens when the Doctor is pushed too far, as the Time Lord’s drive to break a fixed point in time in order to save a doomed Martian colony leads him to a shocking place that’s more akin to the Master. Gripping stuff.

‘The End of Time’ (Parts One and Two)

Is “The End of Time,” whose two extra-long parts comprise about 2 hours, 30 minutes, hella indulgent? Yes. Does it still make for awesome, emotional viewing? You betcha. As the Master leads the Time Lords to return — spelling doom for planet Earth — the Tenth Doctor’s song comes to an end in the most heart-rending regeneration that is guaranteed to leave Whovians blubbing from behind the sofa.

‘The Day of the Doctor’

Ahead of Tennant’s return for the 60th anniversary, it’s only right to rewatch the last time he came back for a birthday shindig — the 50th anniversary extravaganza that was “The Day of the Doctor,” in which Matt Smith and Tennant teamed up to undo the tragic end of the Time War — and the destruction of Gallifrey — with their lost past self, the War Doctor (John Hurt). The 60th has its work cut out in topping this, but we have faith that Russell T. Davies can give “Day” a run for its money.