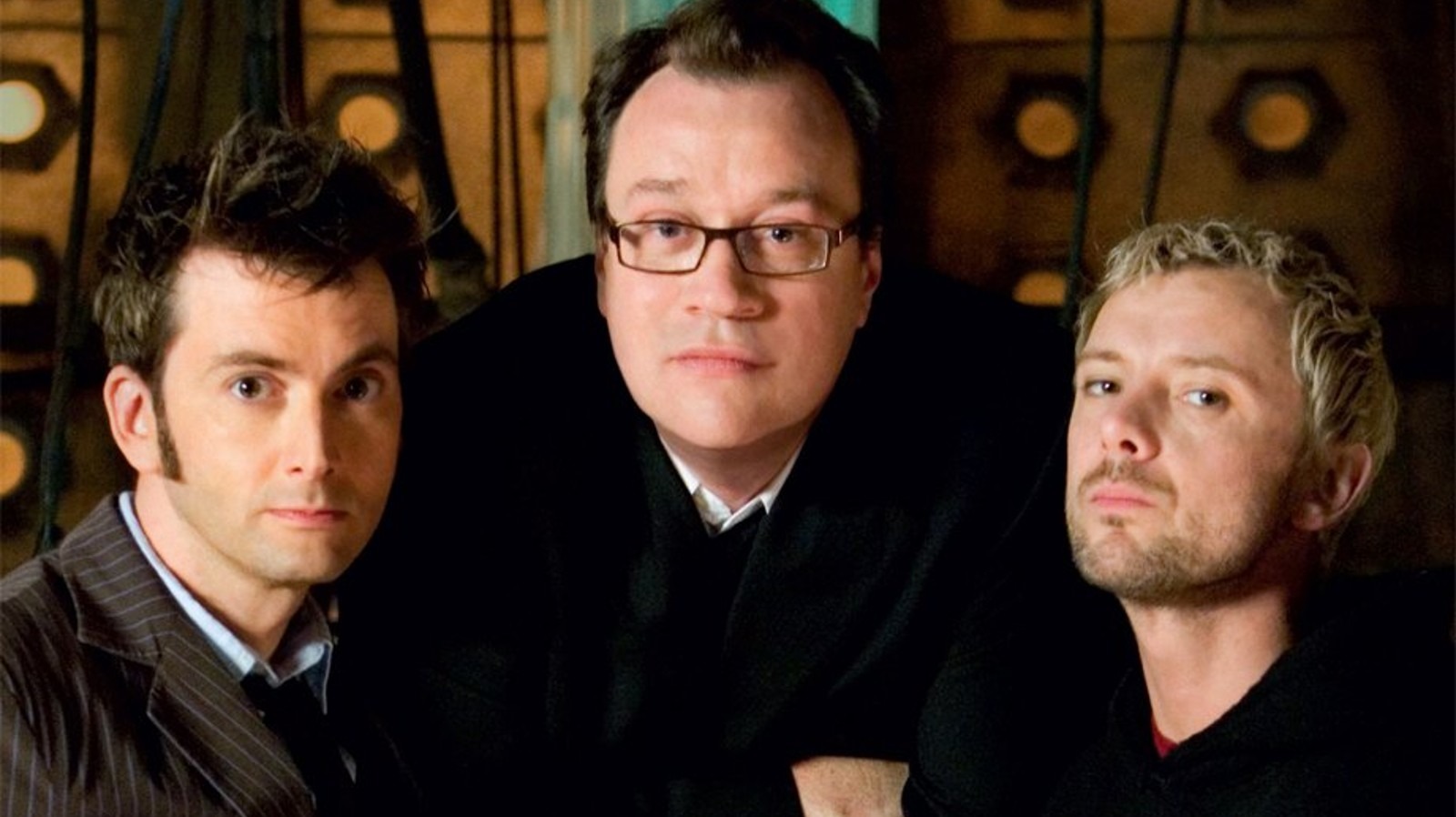 “I don’t want to go.” With those words, the Tenth Doctor disappeared in a destructive burst of regenerative energy on New Year’s Day 2010. It was the end of an era. Not only was David Tenant hanging up his coat, but Doctor Who showrunner Russell T. Davies was saying goodbye to adventures in space and time, too.

Davies had steered the show for five years after masterminding its phenomenally successful return to primetime television in 2005. Jump forward almost two decades, and the announcement in September 2021 that Davies would return to the show surprised most inhabitants of the universe. RTD2 hashtags soon popped up everywhere as the writer hinted at ambitious and fresh plans for the show’s 60th anniversary in 2023.

The format of the long-running show, which can essentially renew itself from one week to the next, drew the writer back. As he told Radio Times:

The reason I’ve worked on 34 programs in my life is because I don’t normally like continuing series. I like looking at a new set of challenges every time and a blank page – but Doctor Who is always a blank page.

Davies instinctively gets the show. He added:

There are things coming up that are brand new ways of telling the stories that have never been done before, so it just feels new.

Davies hasn’t rested on his laurels in the 12 years between his TARDIS gigs. He further cemented his reputation as one of Britain’s greatest screenwriters, penning diverse, unmissable, uncompromising projects on both sides of the Atlantic. So, what has Russell T. Davies been up to over the past decade?

After Doctor Who, Davies headed to America along with his former co-producer Julie Gardner. At the time, Torchwood seemed a logical property to pick up and expand across the Atlantic. If only logic always paid off. The mature Doctor Who spin-off had run for two conventional series before it found its feet. A limited third series proved successful, and Davies targeted a vast and compelling subject for this Transatlantic 10-part run: what if people stopped dying.

The series threw up some brilliant horror, unsettling social critique, and genuinely creepy moments. But unlike the Leftovers and shows that explored similar themes in later years, it struggled to make a mark. Ironically, Miracle Day killed off live-action Torchwood.

The death of brilliant Doctor Who star Elizabeth Sladen closed the doors far too early on The Sarah Jane Adventures, Davies’ second Doctor Who spin-off. Wizards vs. Aliens filled the production schedule, taking a similar fantastical concept but dropping any connection to the worlds of Doctor Who.

At the heart of Wizards vs. Aliens, a young wizard discovered the secret plot of an alien race who’d arrived on Earth to feast on magical creatures. Its three series covered considerable ground, but it never achieved the foothold that Sarah Jane had.

Who could begrudge Davies the chance to work with Bernard Cribbins again? The legendary British actor and Doctor Who veteran had played a pivotal role in the Tenth Doctor’s final adventures and is set to return in 2023.

Old Jack’s Boat was a pre-school children’s show that featured Cribbins as Old Jack. Every week, the captain of the multi-colored boat The Rainbow told a story to his dog Salty, although generally not shaggy dog tales. Davies penned two of them.

Returning to the UK after Torchwood: Miracle Day, Davies masterminded this three-part experiment for Channel 4. The main show, Cucumber, followed middle-aged Henry Best, forced to embrace 21st-century gay life when his personal life shatters. Banana was a sister series broadcast on spin-off channel E4 that took a more anthology approach to cast a light on some characters who appeared in the main show. 4oD’s web series Tofu was an accompanying documentary series looking at aspects of modern sex.

If you want to know how they got the names, it’s scientific, but maybe don’t Google it at work. Being Davies, the appeal of the series crossed genders and sexuality. At its heart, it was a study of a midlife crisis that tested barriers while highlighting hugely important issues, and neatly crossing over with Davies’ pivotal early series, Queer as Folk.

Davies took on Shakespeare for the 400th anniversary of the Bard’s death. His adaptation stayed true to Shakespeare’s play but gleefully drew out new and entertaining ways of looking at the text, from inspired casting to its musical finish.

A worthy and high-profile tribute, it’s an excellent starting point for any Shakespeare newbies. It showcased both writers’ gifts for drama and comedy.

A change of pace as Davies took on a real-life story, the political scandal that ended the career of British politician Jeremy Thorpe. The script was so good that it tempted Hugh Grant to make a rare appearance on the small screen in the role of Thorpe, starring opposite Ben Wishaw. The effortless way Davies turned these real-life events into a highly watchable comic and dramatic story was demonstrated by its semi-sequel. A Very British Scandal continued the theme as an anthology but felt far more one-note and melodramatic.

Davies had touched on dystopia in his science fiction scripts, but Years and Years was the experiment he’d attempted to bring to the screen for two decades. It followed a family through 15 years, tracking their relationships and inner turmoil as Britain underwent political, social, and technological upheaval. The future may be bleak, but the characters were vivid. Be prepared for dark times and another of Davies’ leap-off-the-sofa moments. It’s bold and unsettling viewing and possibly the most significant indicator of how Davies will challenge prime time TV when he returns to Doctor Who.

During the 2020 lockdown, Davies returned to Doctor Who to support the online events that drew fans together worldwide. Over months, thousands watched key episodes in unison, with many former cast and crew surprising them with Tweetalongs and new content. For fandom, it was a beacon during the peak of the COVID-19 pandemic. Davies joined a few Tweetathons and contributed the script for this webcast. Marking the death of Who legend Elizabeth Sladen, the one and only Sarah Jane Smith, it reunited some former colleagues to pay tribute to her character and confirm her death in the show. Of course, Davies put together a perfect, joyous, and heartbreaking tribute.

It’s a Sin could well stand out as the most significant moment on Davies’ incredible resume. It supposedly had a tricky time making it to air, a sad reflection of lingering attitudes to its subject. When it emerged, it was a revelation. The five-part series followed a group of young gay men and their friends in London in the early 1980s as a dangerous disease makes its presence felt.

It’s a Sin didn’t shy away from the horror of the situation facing gay men at the time, both from the disease and society. But it was also a joyful celebration of life, which paid tribute to its characters and the real people affected by the emergence of HIV/AIDS. It’s not an easy watch, but it’s an essential one. Along with Years and Years, It’s a Sin demonstrates how Davies’ writing and ambition have grown since he first brought Doctor Who back to the screen,

Davies’ last work before his new-look Doctor Who is likely to be this three-part return to dramatizing real life. Helena Bonham Carter will star as actress Noele Gordon, who was one of the most famous faces on British TV when she was axed from a prominent television show in the early 1980s in curious circumstances. It’s likely to cast as much light on strong women and their treatment by the establishment as pay tribute to soap operas.

Very little is known about the direction Davies is taking Doctor Who. The writer and producer’s friendliness and openness are brilliant tools to stop people in their tracks… But if you want to prepare, Big Finish Productions have a time machine waiting. The audio production company, which has officially expanded the Doctor Who universe on audio for two decades, recently adapted the first script Davies wrote for the show.

Only, when he wrote Mind of the Hodiac, Davies wasn’t a showrunner but a very young writer. Unproduced at the time, this adventure starred the Sixth Doctor and companion Melanie Bush. What better way to prepare for brand new adventures in time and space.