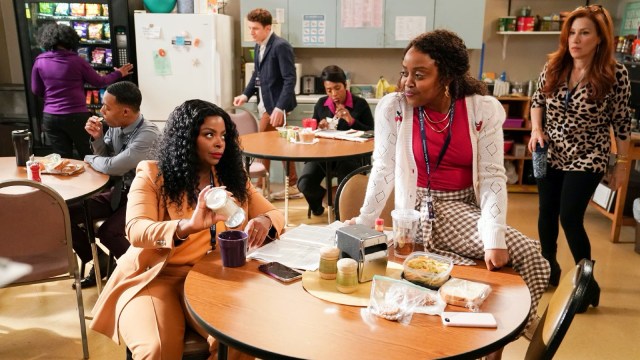 Warning! Spoilers ahead for season two of Abbott Elementary!

ABC’s Abbott Elementary is one of those unique, lightning-in-a-bottle shows that manages to be heartwarming while also legitimately funny, thanks in no small part to the quadruple threat of Emmy-winning series creator Quinta Brunson, who also stars, writes, and executive produces. But as delightful as Brunson, and by extension, her plucky rookie teacher Janine Teagues is, some fans are now calling out the character.

The premise of the series involves a ragtag group of Philadelphia public school teachers who are doing the best they can with what they have — which is admittedly, not much — typically resorting to creative, wholly Philadelphian lengths to fund their classrooms and deal with problem students. And while there is no series “villain,” per se, the inept and unserious Principal Ava Coleman (portrayed by the hilarious Janelle James), who got her job by literally blackmailing the district superintendent, often serves as a foil to the exasperated educators.

Which brings us to a viral tweet this week, playing off of the popular “movie /show villain vs. actual villain” meme from a couple years back. Copywriter Tiffany Nicole tweeted the following side-by-side of Ava and Janine, designating Ava to be the “show villain” and Janine to be the “actual villain.”

At face value, one might want to object — Janine is so wholesome! How could she be the bad guy?!

But taking a closer examination at some of the storylines in recent episodes, it paints a clearer picture. In last week’s episode, “The Principal’s Office,” Janine meddles in the personal affairs of second-grade teacher Melissa Schemmenti (Lisa Ann Walter) and inadvertently makes things worse between Melissa and her estranged sister Kristin Marie (Lauren Weedman).

In this week’s episode, however, Janine’s shenanigans are taken to a whole new level when she insists that the school cafeteria change up its brand of juice to bottles containing less sugar but an additional two ounces of liquid, against the advice of kindergarten teacher Barbara Howard (Emmy-winner Sheryl Lee Ralph) — who advises her, if it ain’t broke, don’t fix it.

This, in turn, causes a mass student exodus for the bathrooms, which the old plumbing cannot handle, and disrupts the entire schooldays as a result.

Suffice it to say, it did not take long for Abbott Elementary fans to draw clearly marked sides between Team Janine and Team Ava.

All good points, but Team Ava (or perhaps, anti-Janine crowd) also had some tea to spill, starting with the author of the tweet herself:

And finally, a not insignificant number of fans are pointing out the real real villain of the series — the underfunded Philadelphia public school system.

The good news is that Abbott Elementary continues to be phenomenal into its second season, so there are only winners and no losers. Well, except for real-life Philadelphia public schools, anyway — womp, womp— which continue to barely get by.