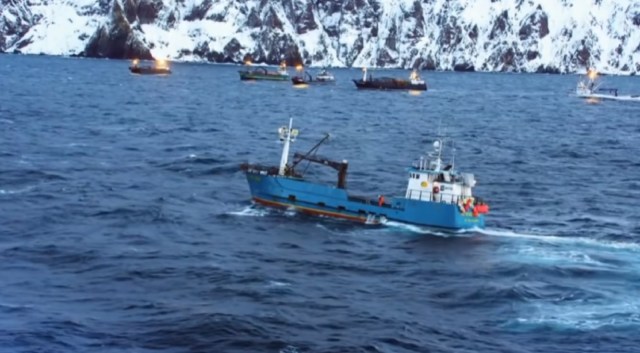 The popular reality action show Deadliest Catch has captivated its fans as it follows brave crab fishermen who risk their lives on a daily basis in literally the “deadliest” waters Alaska has to offer. Commercial fishing is the name of the game here but it’s consistently considered one of the most dangerous jobs in the United States. Crews must constantly contend with the inherent pressure to consistently bring in a big fishing haul, all of the dangerous machinery needed for the job, and frequently unforgiving weather conditions. And let’s not forget to consider the mental toll that automatically comes with these hazards.

For 18 seasons, Discovery Channel’s sea-bound saga has definitely seen its fair share of dangerous and sometimes deadly close calls. However, a number of those brushes with death ended in the worst way possible for certain members of the cast.

The following explains the grim outcomes of Deadliest Catch’s lost cast members. Please note that some details involving the loss of these cast members are not for the faint of heart.

Ross Jones — of the F/V (fishing/vessel) Saga — one of the series’ most popular vessels, was the most recent crew member featured on the television show that has passed away. His death was first shared on the Facebook page, Deadliest Catch World, a reputable source of media for loyal fans of the show. The news of Jones’ passing was made public this past June.

As explained by the author of the Facebook post, specific details regarding his death have not been, and will not be revealed to the general public, out of respect for Jones’ family and close friends. In his passing, he leaves behind a young son from a relationship with his partner, Chloe.

Phil Harris — captain of the F/V Cornelia Marie — was another unfortunate loss suffered by one of the featured fishing crews. The relationship between himself and his sons — who were also crewmates — served as an endearing backdrop to the harsh realities of crab fishing. Unfortunately, Harris had been previously dealing with some serious medical issues during season four and season five. Tragically, he suffered a medical emergency while footage for the show’s season six episodes was underway.

Harris suffered a stroke on board his ship, though the crew was not at sea, instead unloading their cargo at a port in Alaska. Harris was fortunately air-lifted to a hospital for medical treatment but then died 11 days later on February 9, 2010, at the age of 53. He was the first of the series’ cast to have passed away in the show’s history.

Reyes was a popular deckhand on the show, first appearing in episodes that aired in 2012, working on both the F/V Seabrooke and F/V Cape Caution during his time at sea. He was one of several cast members whose fate wasn’t directly related to any fishing activities, occurring at sea, nor occurring on board a water vessel. Though he died in July of 2020, the official cause of death wasn’t revealed until January of the following year. Reyes succumbed to “acute cocaine intoxication”, according to the autopsy results. The manner of the overdose was additionally ruled accidental. He was 38 years old at the time of his death.

Captain of the F/V Maverick, Painter first appeared on the show during season two. His death was like other late cast members in that his passing occurred away from the show’s production. He, unfortunately, had a troubled history involving drug use that included a January 2018 DUI arrest in Astoria, Oregon. Later that year in May, Painter’s whereabouts were in question after he supposedly went mysteriously silent for several days, according to those close to him. He was found in his home unresponsive and pronounced dead on the scene by responding police officers. His cause of death was believed to be from an accidental overdose of heroin, based on the drug paraphernalia that was discovered on Painter’s body and also at the scene. He was only 38 years old.

Lara was in the captain’s seat during season seven’s action, taking over for the late Phil Harris onboard the F/V Cornelia Marie. Yet again, his death was not caused by the rigors of crab fishing as he was nowhere near the waters of Alaska that are featured in the show. Instead, Lara was in Sturgis, South Dakota, attending a popular motorcycle rally in August of 2015. He suffered a heart attack at a local private residence and was later pronounced dead at a nearby hospital. An official toxicology report has never been released although an initial autopsy report at that time showed no signs of foul play involved with Lara’s heart attack. He was 50 years old.

Tennison was a deckhand on the F/V Time Bandit, appearing during season seven. In February of 2011, he had just returned to port from the fishing season that year, having settled into a local Homer, Alaska hotel with several crewmates. After no responses to calls and texts from several colleagues, his body was found unresponsive in his hotel room. Police who were called in found beer, liquor, and a small amount of marijuana at the scene but his official cause of death resulted from complications related to sleep apnea. The father of two was only 33 years old at the time of his death.

Nick appeared over the course of seven years, working as a deck boss while at sea aboard the F/V Summer Bay. Throughout that time though, he endured many battles with substance abuse, including an early exit from the production of season 13, motivating him to undergo rehab treatment. Sadly, his death occurred five months after fellow cast member Reyes Mahlon and from similar circumstances. The constant struggle with drugs and alcohol ultimately took its toll in December of 2020, when his body was discovered in a Nashville, Tennessee hotel room. Police reports showed the discovery of drug paraphernalia relating to numerous substances, with the toxicology results confirming the presence of methamphetamine, cocaine, and fentanyl in McGlashan’s system when he died at the age of 33. He left behind two children in his passing.

Kochutin was a crew member of the F/V Patricia Lee during the show’s most recent, 18th season. He didn’t have much experience out on the waters as a crab fisherman and his death, unfortunately, occurred on the fishing boat, while they were hard at work in February of 2021. It’s not confirmed specifically but it was said that Kochutin may have sustained severe injuries after being struck with a crab pot, a cage that can weigh up to 800 pounds. A medic on board was able to assess Kochutin’s injuries but they were too severe, resulting in his death at sea. He was only 30 years old.

The Crew of the Ocean Challenger

The tragic story of the Ocean Challenger occurred in 2006 when the vessel capsized from an undetermined cause near the Sanak Islands of Alaska. The boat wasn’t as large as other fishing boats that have been featured in the series, as the crew onboard only consisted of four men. After the ship was overtaken by the water, only one survivor, Kevin Ferrell, was rescued as the only member of the crew who was wearing a survival suit. Two others, skipper David “Cowboy” Hasselquist, and Walter Foster were recovered from the water, deceased. And a third person, Steve Esparza, was also found dead after initially being reported missing. Their story was featured on the show in season three.

The Crew of the Destination

In 2017, this vessel was in danger of falling behind schedule on its way back home from gathering a big haul – 200 crab pots in all. However, the ship encountered heavy ice accumulation, at one time weighing down the entire vessel with an estimated 340,000 pounds of ice. Instead of anchoring to deal with all the ice, the crew took the risk of pushing on as they tried to stay on schedule. Sadly, it was a deadly choice as the Destination capsized due to the excessive weight. All six crew members, Kai Hamik, Charles G. Jones, Larry O’Grady, Darrik Seibold, Raymond Vincler, and Captain Jeff Hathaway died as a result of the catastrophe. The incident occurred without a film crew during the production of season 13, though the event is a focal point of an aired episode that same season, “Lost at Sea.”