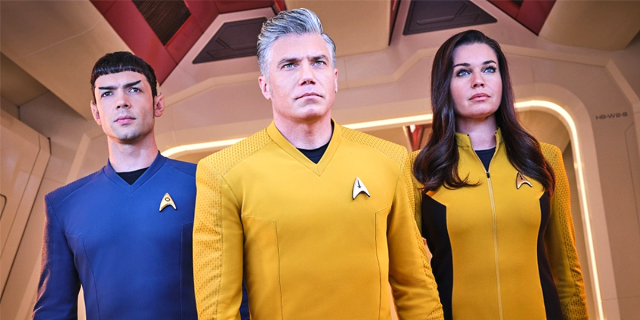 Strange New Worlds is shaping up to be one of the greatest Star Trek series since Star Trek: The Next Generation.

Starring Anson Mount as Captain Christopher Pike, the show has already found a dedicated fanbase who are eager for season two, coming in 2023.

Every episode of season one has had something to offer Star Trek fans, whether it be comedy plots about fantasy kingdoms, deep character studies, or hard-hitting action epics. Below is a list of them all, ranked from worst to best.

A throwback to 1960s original series, “The Elysian Kingdom” tries to bring classic fantasy elements into Strange New Worlds. What we are left with is a muddled episode that never really hits its mark and even the superb acting of Babs Olusanmokun as Dr. M’Benga cannot save it. “The Elysian Kingdom”, however, features some superb set design, extravagant costumes, and Spock (Ethan Peck) with shoulder length black hair. For these reasons, it is worth a look.

A mysterious stranger comes on board the Enterprise and she seems drawn to Mr Spock. “The Serene Squall” is a bottle episode full of shootouts and space pirates. Heavy on the action, it certainly isn’t the most thoughtful outing of the series, but it does feature the crew having to outsmart a capable and devious enemy while trapped in different parts of the ship.

A medical infection plot that focuses on the character of Number One Rebecca Romijn) who must confront dangerous secrets from her past when a deadly virus strikes the Enterprise. “Ghosts of Illyria” really fleshes out the character and gives her a decent backstory. It also sees Number One develop trust with the crew and overcome her fear of being judged because of her race.

Some people maintain that Star Trek is ultimately a horror franchise. Original series episodes like “Obsession” and “The Devil in the Dark” all have horror themes. “All Those Who Wonder” keeps true to this tradition by presenting us with a truly scary plot. The crew is stranded on a supposedly dead planet and are forced to face their personal demons while killer aliens lurk in the shadows. “All Those Who Wonder” is a classic story featuring lots of thrills, jump scares, and emotional twists. It also allows the characters to grow as people as the alien threat tests them to near breaking point.

The opening episode of “Strange New Worlds” is solid and thought-provoking. Pike is coming to terms with his own mortality and deciding if Starfleet is right for him when an old friend visits unexpectedly. Pike returns to command of his beloved Enterprise, embarking on a mission to rescue a Federation officer stranded on a planet in the grip of civil strife. In Pike, we have a captain who follows both his head and his heart in equal measure, and is not afraid to take matters into his own hands in the pursuit of peace. Die-hard supporters of the Prime Directive, however, will be left shaking their fists at the screen.

“Spock Amock” is a comedy episode with echoes of Shakespearean farce. Spock and his Vulcan fiancée T’Pring (Gia Sandhu) are going through a rough patch in their relationship. They end up switching bodies and have to spend time in the others shoes. Ethan Peck shines throughout, as Spock uses illogical actions to achieve a logical outcome. “Spock Amock” lacks the gravitas of some of the other episodes, but it makes T’Pring into a fully-fledged character and further deepens the mutual attraction between Nurse Chapel (Jess Bush) and her favorite Vulcan.

4. ‘Lift Us Where Suffering Cannot Reach’

Despite being a shameless rip-off of Ursula K. Le Guin’s excellent short story “The Ones Who Walk Away from Omelas,” this episode features a neat moral question plot in the style of classic Star Trek. The Enterprise travels to a utopian world free from war and want. Pike loves the place, and even falls for the beautiful alien Alora (Lindy Booth), but there is one major catch: this idyllic society is allowed to exist because of the suffering of a single child. “Lift Us Where Suffering Cannot Reach” makes number four on this list because it harks back to the glory days of The Next Generation, when our heroes would encounter a flawed society and be left without all the answers.

The finale of season one is an excellent alternate reality plot that copies many of the scenes from the Original Series episode “Balance of Terror”. Picking one of the best episodes of original Star Trek to close out the season proved to be an excellent idea. Pike is visited by a version of his future self and receives a dire warning. He then confronts the Romulans along the Neutral Zone and must use all his diplomatic skills to avert a crisis. Not everything turns out rosy when Pike’s admirable commitment to peace results in a shocking series of events that shakes the Federation to its core. This episode also sees the introduction of James T. Kirk (Paul Wesley) into the series.

Ensign Uhura (Celia Rose Gooding), new to the Enterprise and questioning her place in Starfleet, must use all her skills and intelligence to solve an ancient mystery. An asteroid threatens to destroy all life on a primitive planet and the Enterprise crew must beam onto it to try and divert its flight path. Matters are complicated by an indecipherable ancient code and a group of powerful aliens who worship the asteroid and declare it sacrilege to even set foot on it. “Children of the Comet” is a truly fantastic episode that features a high-stakes plot and an ultimately peaceful solution. The use of music as key to the code is inspired, and the duet performed by Uhura and Spock ranks as one of the best moments of the series.

After some initial light-hearted episodes, things take a very dark turn in Strange New Worlds with “Memento Mori.” La’an’s (Christina Chong_ horrific backstory is exposed as the Enterprise repeatedly clashes with one of the most vicious enemies in the series: the Gorn. Pike and his crew must endure repeated assaults from a relentless attacker. La’an holds the key to victory, but she must open up to the others about her dreadful past. “Memento Mori” follows in the tradition of original season episodes like “The Doomsday Machine,” where tensions are at fever pitch and the crew’s survival rests on a knife-edge. For this reason, it is one of the stand-out entries of season one.