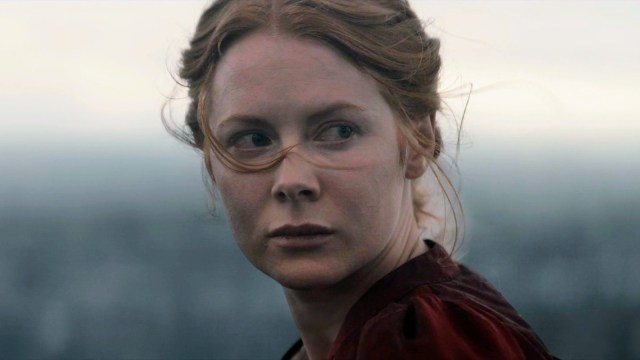 1899 is from the same creators of Netflix’s Dark, romantic partners Jantje Friese and Baran bo Odar, and the two sci-fi shows have a lot in common, and we’re not mad at it.

Dark had such a signature, atmospheric tone to it. The series took viewers on an adventure across time and reality to solve a mystery that upends the small and fictional village of Winden, Germany. It’s highly revered among fans and critics alike, and some have even called it the best sci-fi series ever. 1899 had big shoes to fill, but based on the immediate reception and that jaw-dropping season one finale, the same level of quality has continued in yet another fascinating mystery. This is really only the tip of the iceberg when it comes to the similarities.

Here are all the ways 1899 is like Dark. Prepare to have your mind blown.

Fans of Dark will immediately recognize Andreas Pietschmann as 1899‘s ship captain Eyk Larsen. Pietschmann plays the older Jonas in Dark and both roles are prominent in their respective stories. As the older Jonas, Pietschmann’s character was originally known as “The Stranger” before his true identity was revealed. He was an older version of the main character who traveled through time and finds the younger Jonas, played by Louis Hofmann. He drops foreshadowing hints about discovering a way out and how things would become clear at the end of the journey. Of course, the older Jonas knew this because he was living it.

The tone of 1899 is moody and haunting, just like Dark. Immediately, viewers are thrown into a deliciously ominous world with danger and mystery around every corner. Dark did this first with the village of Windham. Despite not being a real place, it was its own character that was just as essential as every other part of the show. The Kerberos ship and the Prometheus have that same type of effect in 1899. The Kerberos is the ship that the passengers in the show are traveling aboard, and the Prometheus is the abandoned ship that’s been missing for four months. The biggest difference between the locations in both shows is the location of the setting, not the setting itself.

Both 1899 and Dark have plots that center on a missing person. In the former, Maura is in search of her missing brother who she believes was aboard the Prometheus. She’s also convinced that her father is responsible for his disappearance somehow, and she’s committed to finding the truth. In the latter, Jonas’ friend Martha’s (Lisa Vicari) younger brother Mikkel (Daan Lennard Liebrenz) goes missing after he ventures into a cave in a nearby forest, and it turns the town upside down. Both shows share a respective missing person that causes huge ripple effects in the story.

Friese and Odar’s shows make use of quietness and space between dialogue effectively, but they also use music in a specific way. At the end of episodes, after moving through the slow-burning mystery, the shows sometimes give you scenes that are cut almost like a music video. The scenes jump around to different characters, each going through their own personal dramas, and the songs relate to what’s going on in that particular episode for an even deeper meaning. It’s a feature that gives these shows their own vibe and distinguishes them from the rest.

The philosophical themes and religious undertones

To put it lightly, 1899 and Dark have some heavy themes. Dark is a beautiful mix of mad science and time travel concepts that are par for the course in the genre, but it’s the philosophy behind it all that makes it special. There are ideas and quotes from German philosopher Friedrich Nietzsche and his book Beyond Good and Evil, which describes staring into an abyss. Nietzsche’s eternal recurrence concept is examined as well. It’s the idea of living one’s life repeatedly, and that’s really the core conceit of the show. 1899 opens up with a quote from author Emily Dickinson’s poem that expresses how wide the brain is. The passenger Krester (Lucas Lynggard Tønnesen) is Danish and comes from a deeply religious family, and he struggles with obeying the rules or breaking them.

1899 begins with Maura in a mental hospital. She’s being held there by her father and she’s pleading to be let out. She believes that her father is responsible for her brother’s disappearance and she’s desperate for answers. In Dark, Jonas’ father commits suicide and the boy suffers major trauma and depression. He has terrible nightmares and hallucinations and can’t find any peace. He’s admitted to a psychiatric ward for several months, and he takes antidepressants for the pain and his condition is kept secret from most people.

In many ways, 1899 and Dark feel like they’re cut from the same supernatural cloth, and yet their stories are very distinct. Much of what has made the preceding show popular remains in the more recent show, and that bodes well for the show’s future. If the impressive viewership is anything to go by, audiences are ready for more moody mysteries with a sci-fi spin.