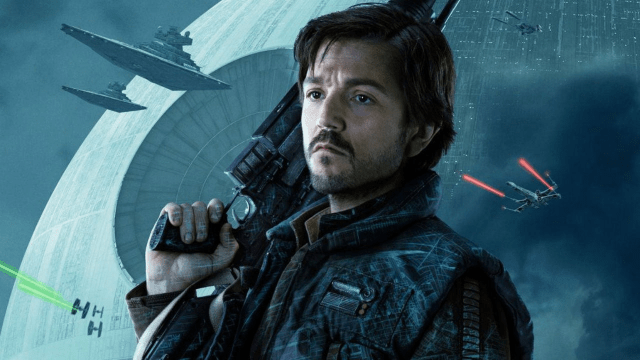 Since the first trailer came out, it’s been abundantly clear that Andor is going to be a very unique entry in the Star Wars universe. In contrast to recent shows like The Book of Boba Fett and Obi-Wan Kenobi which were maybe happy to simply trade in on nostalgia, Andor promises to go in a different direction and offer something a little meatier and deeper than we’ve seen in the franchise since, well, Rogue One.

In a chat with Digital Spy, ahead of the series making its super-sized three-episode premiere this Wednesday, leading man Diego Luna spoke about why he thinks Andor is so much more “inspiring and beautiful” than other Star Wars projects. In short, it’s all to do with its exploration of oppression, the strength of the community, and perhaps a more grounded kind of heroism than Jedi with lightsabers. As Luna explained:

“Cassian is a character that finds commitment and strength in very dark moments. In very difficult moments for the galaxy where people are oppressed, and where answers, apparently, aren’t coming. What needs to happen for someone to get there? For someone to believe so much in a cost, and in the power or the strength of a community? That’s fascinating, because it’s inspiring and beautiful. It’s a story about a real hero. And heroes. Even though it’s called Andor, you’ll get to meet a whole community – people who are crucial in the building of what we know happens.”

In the same interview, Luna defended Andor‘s right to exist, stating that, although we know how Cassian’s story ends thanks to Rogue One, the show allows for a much fuller dive into who his character is and why he was willing to go on a suicide mission for the sake of the galaxy in the first place. So it sounds like Andor isn’t just content, like a lot of franchise projects these days, but is an actual piece of storytelling. And Luna really knows the difference, as he’s just done DC League of Super Pets.

But you don’t have to just take his word for it as the early reactions to the show promise that it will be full of mood and atmosphere, with some even comparing it to a dark Ridley Scott sci-fi project rather than the family-friendly wonder we usually expect from Star Wars. We can make up our own minds about Andor when it kicks off on Disney Plus this Wednesday, Sept. 21.