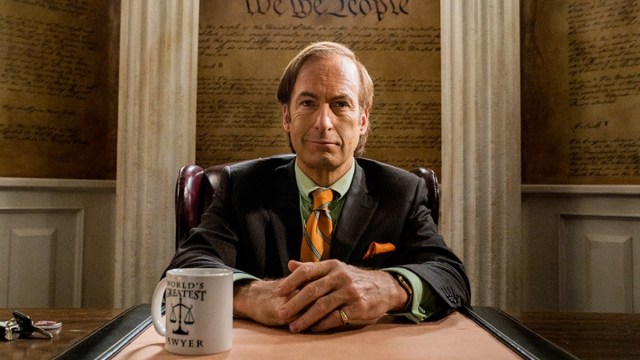 Warning: Spoilers ahead for the sixth and final season of AMC’s Better Call Saul…

AMC’s Better Call Saul wraps up its sixth season run on Monday night in what will surely go down as one of the most acclaimed season finales in the history of modern television. The Breaking Bad spinoff helmed by series creators Vince Gilligan and Peter Gould was always better than it had any business being by focusing on the origin story of shady lawyer Saul Goodman portrayed by funnyman turned dramatic actor Bob Odenkirk in a career-turning role.

And yet, here we are. The back half of season six finally gave viewers the answers the answers they’ve been longing for as to how ne’er do well attorney “Slippin’ Jimmy” McGill finally made his metamorphosis to Goodman — namely, in the aftermath of Howard Hamlin’s murder, when Kim Wexler (Rhea Seehorn) decided once and for all that their toxic pairing was hurting people and that they needed to go their separate ways.

For Kim, this meant changing her hair and settling into an unexciting, yet depressing life working for a sprinkler company in Florida and dating a boring guy who thinks she should give Miracle Whip a shot and says, “yep” a bunch when he’s getting ready to climax. In the case of Jimmy, on the other hand, this involved going down a dark path leading to the series of events that took place in Breaking Bad; and eventually, falling back into old habits while in hiding as “Gene Takavic,” the manager of a Cinnabon in Omaha, Nebraska.

However, the penultimate episode titled “Waterworks” saw the house of cards for both characters come crashing to the ground. While Kim signed an affidavit admitting to the various crimes and schemes that resulted in Howard’s murder, Gene’s increasingly reckless behavior led to senior citizen Marion (Carol Burnett) figuring out his true identity and alerting the authorities.

Things are not looking good for either Kim or Jimmy/Saul/Gene heading into the finale, though arguably way, way worse for Jimmy. And the episode title of the finale, “Saul Gone” — a play off of Saul Goodman, a name chosen for its similarity to the phrase “s’all good, man” — seems to reflect as much. Kim could be looking at prison time for her indiscretions, but Jimmy is about to face up to capital-C crimes.

“That’s Saul, folks,” the show’s official Twitter account tongue-in-cheek quipped on Monday morning ahead of the finale, along with a pared-down version of the logo — now just ominously featuring the scales of justice — as if the title alone wasn’t bad enough.

But for better or worse, Better Call Saul fans are getting ready to say goodbye to the series after more than seven years. As such, many took to Twitter to express their excitement and impending dread over the forthcoming finale.

Plenty of others focused on the title “Saul Gone” — though it’s presently unclear whether it means that Saul will die, go to prison, or slip through the fingers of justice yet again?

One fan account warned viewers to have tissues ready…

While another pointed out that Gilligan and Gould swapped penultimate and finale writing and directing credits from Breaking Bad.

“Saul Gone,” the series finale of Better Call Saul, will air at 9pm on AMC and stream concurrently on the AMC+ app. This is undoubtedly one you’ll want to watch live.