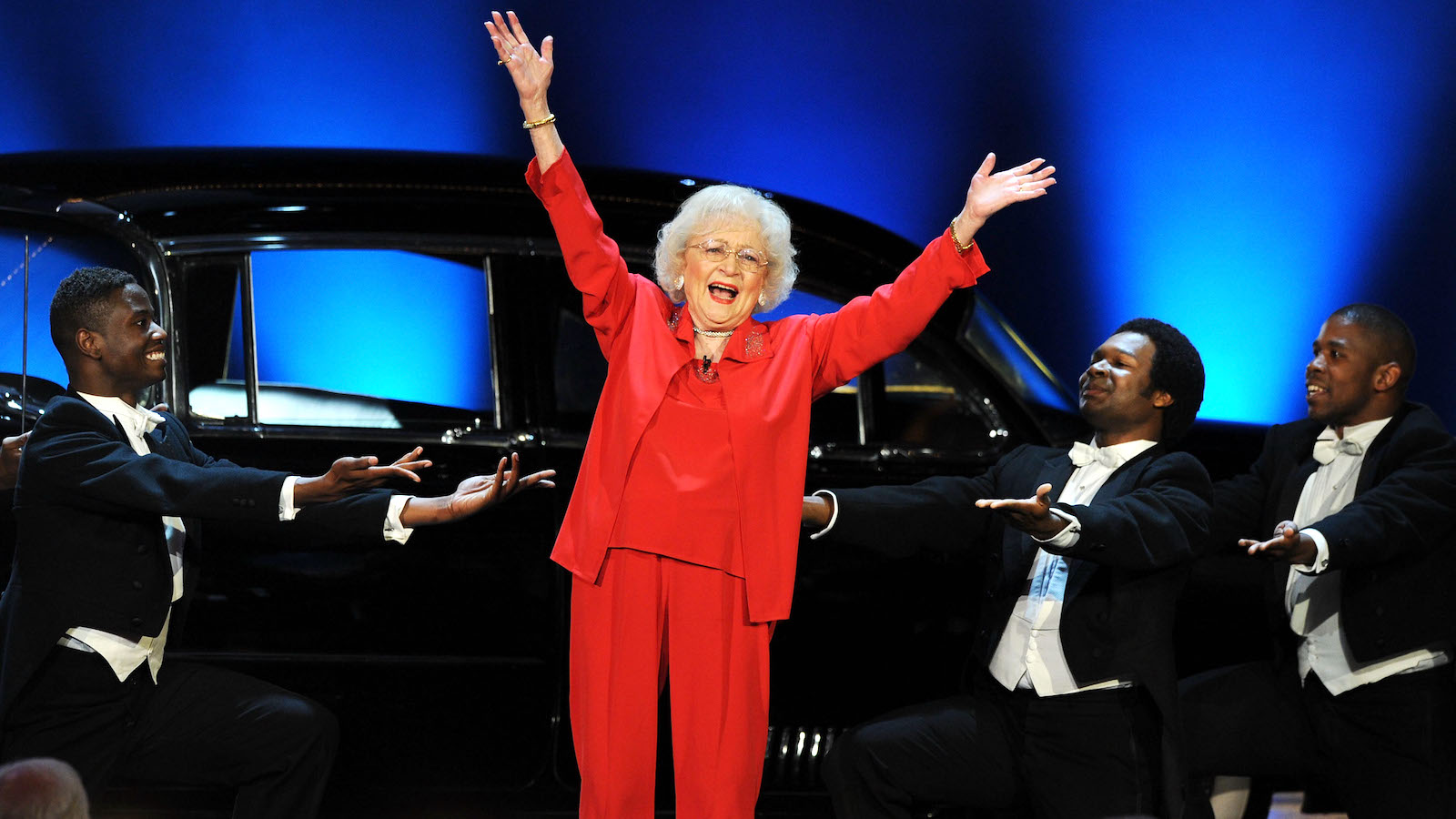 Betty White earned the title “Longest TV Career for a Female Entertainer” for good reason. Her incredible relationship with the world of entertainment, specifically television, spans 80+ years. White isn’t just a familiar face, either ⏤ audiences of every generation have known and loved her for her portrayals of iconic characters like Elizabeth in Life with Elizabeth, Rose in The Golden Girls, and of course Elka in Hot in Cleveland.

White’s passing at age 99 was heart-wrenching to those who loved and admired her, especially since we were all gearing up to celebrate her 100th birthday with her on Jan. 17. White’s characters were lasting and impactful because of her dedication to the craft, her love of acting, and her kind, joyous personality.

She delivered sour as well as she did sweet, and her characters were all over the creative board. From hilarious and fun to serious and heart-wrenching, she delivered each performance with grace and talent, ensuring that her roles would live forever — as we all hoped she would — with her grit, grace, perseverance, and knack for finding optimism anywhere she looked.

Here’s a look at the best TV shows Betty White appeared in over the years and the characters she played that we’ll hold in our hearts forever.

Life with Elizabeth navigated life between White’s character Elizabeth and her newlywed husband, Alvin. Told through several comedy sketches per episode, the show performed well with audiences and became quite popular. The chemistry between White and Del Moore as husband and wife was charming and relatable. Elizabeth was White’s first leading role in a sitcom and she often brought her love of animals into the series. One of the best episodes finds Alvin and Elizabeth surprising each other on their anniversary with puppies!

A memorable line: “I might have known that neither one of us could have passed that little old lady and her basket full of puppies.”

White had a lovely singing voice, and fans were greeted by song with each episode of The Betty White Show. It was a daytime talk show with elements of a variety show that saw White herself as the host. From helping viewers in need to the controversy surrounding Arthur Duncan as a series regular, The Betty White Show made an enormous mark on entertainment.

Arthur Duncan was a dancer and entertainer on the show and the Jim Crow South was displeased with his spot on television. When they wanted White to remove him from the series, she told them no. Keeping Duncan on board and away from the controversy, White helped kick-start his career, which he thanked her for years later. You can find episodes of The Betty White show on YouTube.

A memorable line: “I’m sorry, but, you know, he stays. Live with it.” (White addressing the Arthur Duncan controversy.)

The Pet Set was a show near and dear to White’s heart, as she was thrilled about the prospect of mixing her two greatest passions: acting and animals. The series was one of White’s true loves and most extraordinary creations, a joint project with husband Allen Ludden that starred several of their friends and loved ones as guests alongside their furry friends. As White and Ludden brought their love of animals to audiences, they also shared it with one another, further deepening their connection.

Some guest stars of The Pet Set include Mary Tyler Moore, Burt Reynolds, Michael Landon, Doris Day, and Felicia Ames. While the guests all loved furry friends, none enjoyed them quite as much as White. Be it a dog or a lion, White was eager to make friends and cuddle with all of the animals while sharing more about them with viewers at home. White’s love for animals didn’t stop there ⏤ she continued to share stories of the furry (and scaly and feathery) friends she adored throughout her life and found ways to ensure their care and health were a top priority.

A memorable line: ”All I can say is, Charlie Brown is right: Happiness is a warm puppy.”

Sue Ann Nivens was a character written for Betty White, or a “Betty” type, because the show was sure it wouldn’t be able to get White herself. She was “sickeningly sweet,” and White laughed at this any time she was asked about the role. The Mary Tyler Moore show starred Mary Tyler Moore as Mary, an associate producer of the evening news at a “low-rated” station with associates that play a pretty big role in her life. One such co-worker is Nivens, and while the pair don’t get along perfectly, they grow to have an understanding of one another and an eventual friendship. Nivens was the host of The Happy Homemaker, a show that painted her as the perfect housewife. Her “off-screen” persona, however, was more sarcastic, flirty, and fierce. She was one of our favorite characters that White played and many other fans feel the same way.

A memorable line: “Snow always inspires such awe in me. Consider one tiny snowflake, so delicate, so fragile. And yet, let a billion or so come together through the majestic force of nature, and they can really screw up an entire city!”

White’s husband, Allen Ludden, was the host of Password, a popular game show that fans adored. White frequented the game show and fans loved to see her appearances, as they got a look into her life with Ludden. Ludden’s wife was sick when the show began airing, and White’s first episode aired the week she passed away. The two met again months later at an event, and their relationship began to grow from there. They were funny, a little snarky, and looked at each other with stars in their eyes. The two appeared on several other game shows together as well, but Password was important to both of them.

A memorable line: After being asked the password of the night by newlywed husband, Ludden, White responded sweetly: “Home. Will you take me home, please, Mr. Ludden?”

If you know all about “Picture it — Sicily” and “Back in St. Olaf” alongside all things cheesecake and Blanche’s little black book, then you’re a true Golden Girls fan, and we totally get it. The Golden Girls is our comfort show, it always has been, and we’re honoring White by rewatching all of our favorite episodes — aka the entire series — from start to finish. The characters worked incredibly well together and gave their audience much to laugh at and get emotional about. Rose Nylund, White’s character, was kind, funny, full of love, and the glue that held everyone together. Rose’s St. Olaf stories shaped the series, she made us all aspire to think more like a child and offer kindness to those around us. The Golden Palace was a continuation of the girls’ story without Dorothy, who got married during The Golden Girls‘ series finale and saw Rose, Blanche, and Sophia as they purchased a hotel. A new chapter for our favorite girls was a welcome treat for fans, and you can stream the series soon on Hulu.

A memorable line: “I feel like crawling under the covers and eating Velveeta right out of the box.”

Ladies Man saw the life of Jimmy Stiles as he shared a home with several female characters and the impact it had on his life. The comedy sitcom featured hilarious situations, heartwarming moments, and White as a loving grandmother who helped to steer Jimmy and his grandchildren towards the best parts of life. Ladies Man was also responsible for a reunion of The Golden Girls, and fans absolutely ate it up.

Elka Ostrovsky is a legendary comedic character and a backbone to the series as a whole. Hot in Cleveland chronicles the stories of three friends who move to the city when they realize that they’re a hot commodity there, unlike in sunny California. They meet the caretaker for the home they’re renting and, while it’s a snarky one, they form a friendship with her soon after. She also becomes a caretaker for the girls, and they help each other as much as they poke fun at one another. White laughed as much as fans did about the characters and their storylines, and you could tell that making this show was a treasured memory for the star.

A memorable line: “I signed up when my bender was over; in fact, that’s my screen name — bender over.” (You’ll have to watch this outtake video to understand why we still aren’t over that line.)

White having a role on Pound Puppies seemed destined to happen, as her love for animals was her greatest life’s passion. The character she played wasn’t as animal-obsessed as White was in real life, at least not when we first meet McLeish. However, after she met a special pup, she became a dog lover. Agatha McLeish and Rebound were a perfect pair, and the series was sweet and full of adorable moments.

A memorable line: “I don’t need a ribbon to tell me my dog is a champion; she’s much more than that — she’s my friend.”

Betty White: Off Their Rockers

White was the host of a show called Betty White: Off Their Rockers, which showcased elders playing pranks on others. The series was hilarious and appealed to audience members who love hidden camera-type shows. From helping to “spread an ex’s ashes” to a nun using foul language, the pranksters took on roles that were surprising to those around them. White shared her thoughts on the pranks being played, her jokester friends, and comedy wisdom of her own throughout the series.

A memorable line: “When I heard about all these television shows on the air today that are about hypersexual beings that don’t age and live forever, I was surprised to find out that all these shows were about vampires. I thought they were FINALLY making the Betty White story.”

In the days leading up to White’s 100th birthday, fans are enjoying some of her best television and film appearances to celebrate the legacy she leaves behind. We can think of no better way of doing this than by enjoying her many dazzling performances for years to come. Here’s to you, Betty White.