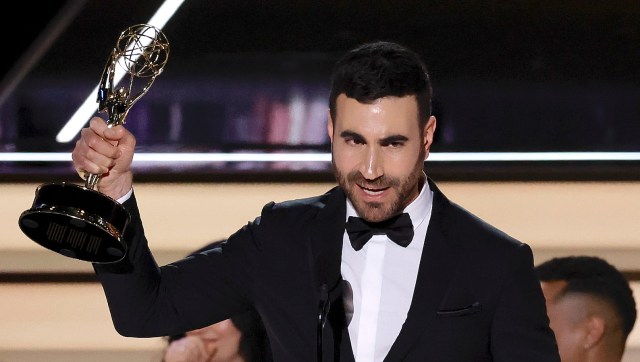 This year’s win seems even more historic than the first for the British actor as he was nominated alongside his co-stars Toheeb Jimoh and Nick Mohammed. He also emerged victorious against former Emmy winner Henry Winkler, who received his first award in 2018 as the eccentric acting coach Gene Cousineau in the HBO comedy Barry, and five-time winner Tony Shalhoub for his role as Abe Weissman on The Marvelous Mrs. Maisel.

Goldstein is also a writer and executive producer of the comedy-drama, and has received critical acclaim for his portrayal of the aging soccer player in what many have cited to be his breakout role.

Ted Lasso won big at the Emmys last year and it looks like things are continuing to look up for the cast and crew. Hannah Waddingham and Jason Sudeikis both won for their roles as Rebecca Welton and the titular character respectively, and the series  took home the Primetime Emmy Award for Outstanding Comedy Series. In total, seven out of a whopping 20 nominations were won.

This marks Goldstein’s second win from only two nominations, and with a third season of Ted Lasso on the way, perhaps the star might go for his third goal strike.

The series is nominated for another stellar 20 Emmy Awards this year.