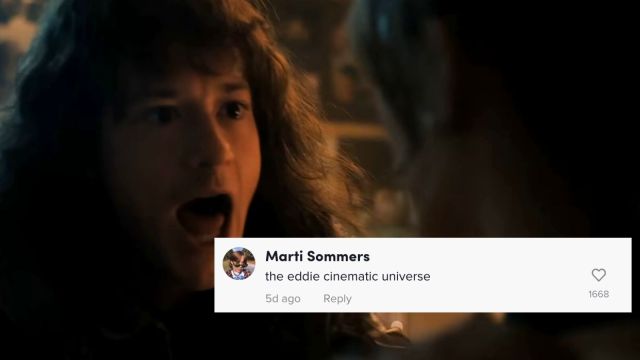 Stranger Things season four has brought a lot of iconic and memorable moments. One of them, when Eddie tried to wake up Chrissy from Vecna’s curse, has become so popular that a song version of the scene became a TikTok sound. But fans of the song decided to take it up a notch as they gave the TikTok sound a Marvel makeover.

Fans who saw the video were amazed at the music production, leaving comments that mashed up the two franchises.

The video was so popular that fans asked for the TikTok sound to be mashed up with other genres. One suggested a mash-up between “Chrissy Wake up” and the Stranger Things theme song, which OP happily created.

Fans hoped that Joseph Quinn (aka Eddie Munson) would see the video considering that he did voice the TikTok sound. Others began fantasizing about where Eddie would sit in the MCU or if he would have his own multiverse.

“Chrissy Wake Up” is an auto-tune remix created by SchmoYoho, the same people behind the Unbreakable Kimmy Schmidt theme. The music group took the scene from Stranger Things when Chrissy was about to be killed by Vecna and turned it into a song. It eventually made its way onto TikTok where it was used nearly 45k times on the platform.

All episodes of Stranger Things Season 4 are now available to be streamed on Netflix.