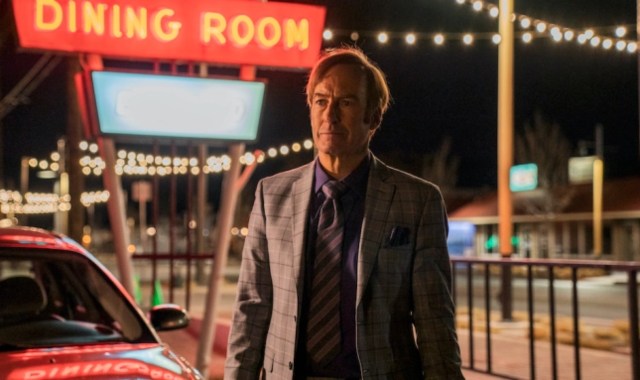 The world of Better Call Saul and Breaking Bad (for now) came to a firm and conclusive end yesterday. The last episode of the prequel, parallel show and sequel featured many homages to earlier episodes, and, in its final shot, really went for authenticity.

In the final moments, two characters who previously smoked in front of each other connected to do so again. Unlike in other instances where the smoking is computer-generated or the actors are not using actual cigarettes and instead make use of healthier alternatives, here, they used the real thing, as co-creator Peter Gould reveals in a Variety report today.

“Both Bob and **** were coughing. I had cigarette smoke down my throat for a couple days after. It looks so damn cool, but it’s not good for you.”

Later in the article, Gould also reveals there was a considerably longer cut of the final episode than that which made it to air. He also says flashes of color in the show’s black-and-white scenes are intended to invoke nostalgia for who some characters used to be, and the conclusions each main character reached in this crime-ridden world nicely tie the trilogy of two shows and a film up together.

“In terms of the trilogy of the shows, it feels very elegant that Walt dies, which he was always going to do. He dies on his own twisted terms. Jesse suffers greatly. He’s in a prison of his own and he gets away and starts healing. And Jimmy gets his soul back, but he’s ************. That just felt right, the three protagonists, they each have their own ending.”

Franchise creator Vince Gilligan has said the Breaking Bad world is on ice for the foreseeable future, but has also left the door open for future projects. In the meantime, his initial shows and the El Camino: A Breaking Bad Movie are available on Netflix and the 55-year-old is working on a new show. It is said to be similar to his work on The X-Files, and will hold a mirror to humanity while shifting reality. It has also been likened to The Twilight Zone, and may explore the human condition via some unexpected methods.