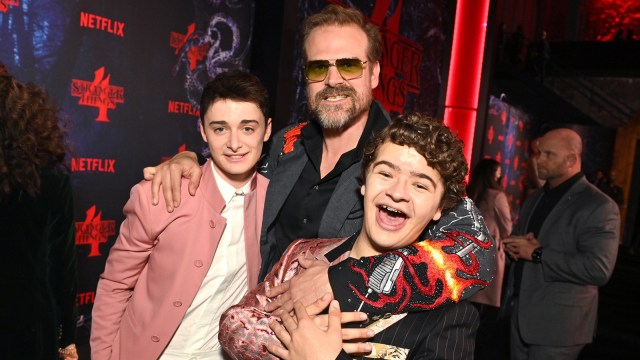 He plays Chief Jim Hopper, Eleven’s adoptive father, on the show, and it seems that Stranger Things actor David Harbour harbors some protective parental feelings towards his teen co-stars in real-life, too. Unlike himself and Winona Ryder, much of the Netflix smash-hit’s ensemble cast were thrust into the limelight at a very young age when ST became a worldwide phenomenon six years ago.

While this has launched their careers in the best way possible, Harbour has lamented that the likes of Millie Bobby Brown, Finn Wolfhard, and Gaten Matarazzo never got to have a normal adolescence because of their meteoric rise to super-stardom. In a frank interview with The Independent, Harbour admitted that he regrets the fact the younger Stranger Things cast members had to grow up sooner than he would’ve wished them to. As he put it:

“[They] don’t really get to have the childhood that I wish they could. The popularity and the money that they’re dealing with at 12 and 13 years old is… it just makes you an adult.”

While the Stranger Things kids have thankfully become well-adjusted individuals, it is true that growing up in the spotlight hasn’t always been easy for them. Brown has previously called out the “gross” way she’s been treated by the press and on social media since turning 18. Likewise, she remarked that “navigating being an adult and having relationships and friendships” in the public eye has occasionally been “overwhelming.”

As for Harbour, he’s become a dad IRL lately as his 2020 marriage to singer Lily Allen made him a step-father to her two daughters, Marnie (9) and Ethel (10). “It was lucky for me because I am now in a relationship with three women. Very strong-minded women,” the 47-year-old gushed to Independent. “[It] has brought a whole new depth to my life that I never had before. Made me an entirely new man. And that’s wonderful.”

His on-screen alter ego, Hopper, however, is not in such a wonderful place right now, having been imprisoned in a Russian gulag all season. We’ll see what’s next for Hop when Stranger Things 4 drops its second volume on Netflix this July 1.