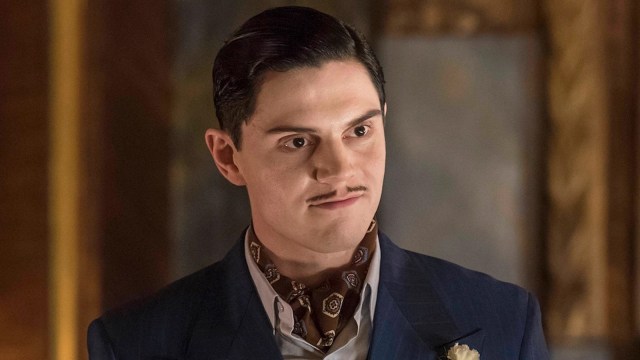 Image via FX
Review of:

When thinking about an actor like Evan Peters, it’s easy to remember his biggest roles ever including Dahmer – Monster: The Jeffrey Dahmer Story, X-Men: Days of Future Past, and X-Men: Apocalypse. However, his many roles in American Horror Story stand out just as much since they prove he is a dynamic actor.

Evan has beaten out all other male actors based on how many seasons of AHS he’s appeared in. Seasons nine and 11 are the only times when viewers won’t be able to catch a glimpse of his talent. In the rest of the show’s creepy and haunting seasons, he’s done an impressive job taking on personas of people no one would ever want to bump into in real life. Here’s how his AHS roles rank.

When Evan played Rory Monahan in “My Roanoke Nightmare,” it was forgettable, to say the least. This role as Rory didn’t last long, which is why it ranks last. He tied the knot with Audrey before meeting his ultimate doom. If Evan was able to stick around for longer as Rory, he might’ve earned a higher ranking.

Evan was Jeff Pfister in “Apocalypse.” Jeff was one of the most annoying AHS characters to deal with for a multitude of reasons. His job as a robotics engineer was the reason he acted like somewhat of a know-it-all. The fact that he sold his soul made him even worse. His desire to plot for the end of the world was the icing on the cake in terms of how bad he was. His terrible haircut made him one of the easiest characters to loathe.

In “Coven,” Evan played the role of Kyle Spencer, a frat boy with bleach-blonde hair, but that wasn’t his downfall by any means. Frat boys get a bad rap for being party lovers who sleep around, drink too much, and skip class. He was consistently being used as a pawn in an evil game played by the scariest and most power-hungry witches of the entire show. Instead of standing his ground as his own person, he was nothing more than a tool in the machine.

“Freak Show” is where viewers got to see Evan play Jimmy Darling, also known as Lobster Boy, performing for paying customers who would come to visit him at a local freak show. The reason he had such a degrading nickname is that he was born with deformed hands that left him feeling like a total outcast. Jimmy was someone people pitied since he only yearned for a normal life experience. He was comparable to Edward Scissorhands, played by Johnny Depp back in 1990.

Edward Mott came to life thanks to Evan in “Roanoke.” His passion for fine arts depicted the fact that he had a keen eye for detail and a heart for creativity. His interest in fine art showed off his desire to live a life filled with upscale luxury and comforts. He was also a gay slaveowner, which made him an incredibly messy and complex character as a whole.

Evan took on the role of Mr. Gallant in “Apocalypse.” There was something very energetic, fun, and playful about him as he handled the dark persona. Mr. Gallant was widely recognized as a hairdresser with a sharp tongue and a witty sense of humor. He made sure his suits were always up to stand with impeccable tailoring, and he had flawless comedic timing.

Viewers recognize Evan as Austin Sommers in “Double Feature: Red Tide.” Austin made a living for himself as a traveling playwright who loved visiting Provincetown, Massachusetts, every year like clockwork during winter seasons. The small New England town was perfectly familiar to him. Austin’s talent for writing scripts was fueled by his consumption of little black pills that also made him thirsty for human blood.

In “Cult,” Evan didn’t simply play one cult leader; he played multiple cult leaders who didn’t always have good intentions for any of the people around them. One of the more positive leaders he represented was Jesus Christ, but he also played Jim Jones, Charles Manson, and David Koresh to name a few. Evans gave each leader the time and attention needed for a genuine level of realism.

In both “Hotel” and “Apocalypse,” Evan played James Patrick March. James was one of the more difficult characters to relate to since he was so heartless. He was so cold that he was even willing to kill his own wife, played by Lady Gaga. James twirled his mustache and murdered anyone who was in his way without a lick of remorse.

Evan handled the role of Kit Walker in “Asylum” with true grace. Instead of being the terrifying villain everyone needed to hide from, he played the victim this time around. After being accused of killing his wife, Kit was sentenced to live his life in a sanitarium where he simply didn’t belong. Despite his innocence, he was trapped there against his will. Eventually, he was forced to fight back against aliens, monsters, and other daunting forces.

Evan played several cult leaders in “Cult,” but he also successfully played Kai Anderson. Kai was the type of cult leader that made supernatural horrors feel like a piece of cake to deal with in comparison to him. The true brunt of his evil ways was hard to digest. Evan did such an incredible job as Kai that he earned a nomination for a Critics Choice Award.

Evan played Tate Langdon in “Murder House,” and he picked up the role again for “Apocalypse.” Tate should have been easy to despise due to the fact that he was a sociopath who died in the process of shooting up his school. His love story with Violet gave viewers a chance to see him as a real person with emotions before he reached that point. His complex character arc went further when he became entangled with the witches of “Apocalypse” during their travels.