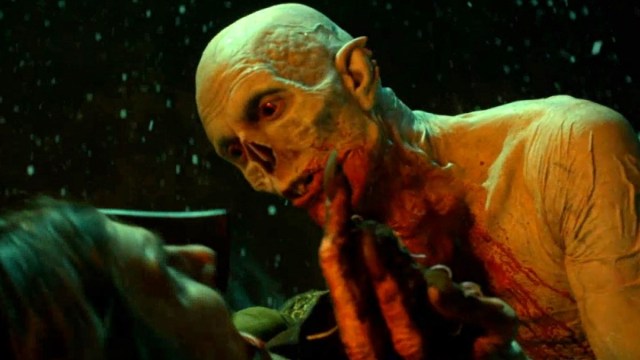 Movie franchises and multi-season TV shows regularly suffer from the law of diminishing returns, but even half a decade hasn’t allowed fans to appreciate The Strain in a brand new light. Not yet, anyway.

The adaptation of the literary series created by Guillermo del Toro and Chuck Hogan started off strong with its first season, which featured a bevvy of top talent on either side of the camera – including Corey Stoll wearing one of the worst wigs of all-time, veteran actor David Bradley proving himself to be an absolute badass, with del Toro himself even directing the pilot.

Those first 13 episodes introduced us to the colorful cast of characters tasked to prevent the vampire apocalypse, with elder bloodsucker The Master seeking to assume control of the social hierarchy as his minions set about creating a viral catastrophe that works entirely in the benefit for those either with fangs, or affiliated with the undead.

Unfortunately, though, the quality began to gradually go downhill the longer the series progressed, and even now fans on Reddit are still struggling to comprehend what happened to The Strain after such a glorious introduction to the concept.

Your mileage may vary, but it’s hard to deny that The Strain was running on fumes by the end of its fourth season. It felt like a two or maybe three-year premise stretched out to an unmanageable 46 episodes, and while the highs are very high – there’s also an alarming number of lows that come around at much more regular intervals the longer the story spun its wheels.