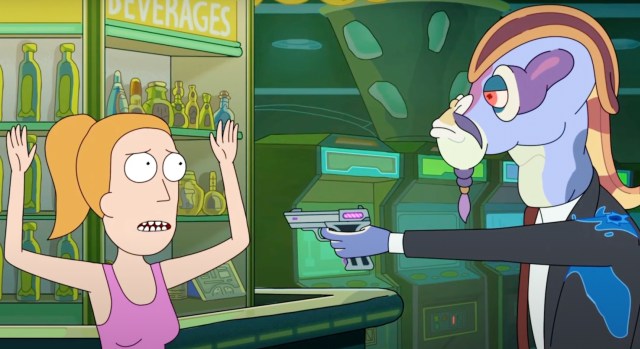 If The Simpsons made guest star appearances on animated shows hip, there’s no hipper place for someone famous to go these days than Rick and Morty.

Following in the footsteps of The Simpsons, South Park, and a slew of other animated series, Rick and Morty has featured scores of stars lending their pipes to the absurd (and absurdly good) series. From both Keegan-Michael Key and Jordan Peele to Stephen Colbert, Patton Oswalt, Jemaine Clement, Matthew Broderick, Paul Giamatti, and several stars of Dan Harmon’s other show, Community, Rick and Morty pops in guest stars throughout its seasons like Rick pops alien pills. The current campaign, season six, has been no different. Except the crew behind Rick and Morty, including creator Justin Roiland, keep things very, very tight to the vest, so knowing who is going to appear in an upcoming episode is tough to decipher.

Only three of the six episodes in season six have featured guest stars so far, one of whom we’ve encountered quite a few times already. If we know anything about the show—wait, that’s stupid, we have no idea what could come next or what those folks have going on in their brains. Let’s just say there might be more to come.

While the show is on a break until Nov. 20, let’s look at who all has made guest appearances in the Adult Swim series so far.

If you’ve watched anything animated over the years, you most definitely know the name Kari Wahlgren. Rather, you would know her if you heard her. Now that we think on it, she is such a master of vocal acting that you might not recognize her if you heard her because she can morph into so many roles and characters.

Wahlgren has been showing up in Rick and Morty since the beginning. Technically, she’s not in the main cast because she isn’t always there, but since 2013 she has played such well-known or immortalized characters as Morty’s love interest, Jessica, as well as Roy’s wife, and Rick’s wife, Diane Sanchez. In the premiere episode of season six, Wahlgren is back as a new-yet-not-new character (that’s a Rick and Morty sentence if there ever was one), playing an AI machine meant to replicate and impersonate Rick’s deceased wife, Diane, and going by the name/acronym D.I.A.N.E.

Here we get worlds of awesomeness as Peter Dinklage enters the scene, to the joy of fans everywhere, to create a Die Hard world within a world. He voices Chans, who is the leader of a group of alien terrorists reminiscent of Alan Rickman’s character in the movie, Hans Gruber.

This episode has it all for longtime fans—Blips and Chitz, the immersive and disturbing VR reality game, Roy, a side story/main story featuring Summer who does her best Bruce Willis/John McClane, and amazing references. The episode plays out the most memorable Die Hard moments all the way down to Rick creating a catch phrase that will surely strike a chord with pop culture: “Do a Die Hard.”

First off, the absolute legendary Keith David is back as President Curtis, Rick’s long-running nemesis-slash-cohort, and he is as great as ever. Second, Lisa Kudrow has to be considered one of the most recognizable and iconic voices of a generation. Getting the former Friends star here reminds us only a tiny bit of that time Jennifer Aniston was in a very early season episode of South Park. Then, out of nowhere, we also get Jason Mraz as a guest star, who along with Kudrow, play…technologically advanced dinosaurs? How did we get that duo as a pair in one episode? Kudrow gets to build off her The Good Place appearance as an enlightened being. This time, instead of being in Heaven, she’s crash landed on Earth.

The batshit brilliant idea that dinosaurs have a sworn enemy—sentient asteroids—is the type of out-there idea that only Roiland and Harmon could summon. In the context of the show, once you see and hear it play out, it’s not that crazy, and in this universe, it actually makes some sense.

See you back here for the next update following the seventh episode.