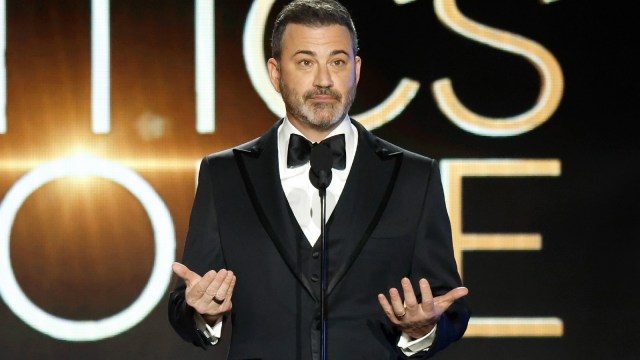 One moment, people were worried about Jimmy Kimmel’s MIA status on his show, but the next second, his “stunt” at the 2022 Emmy landed the late-night show host in hot waters. At the recently held awards event, Kimmel took his gag way too far when he continued his pretending-to-be-unconscious act even when Quinta Brunson was giving her acceptance speech after winning for writing the pilot episode of the popular series Abbott Elementary.

People have been rightfully chiding Kimmel for stealing Quinta’s spotlight, who is only the second Black Woman to win the prestigious award. While the writer-actor has been very gracious and forgiving towards Kimmel’s antics, the internet has not been able to gulp down how unnecessary and annoying it was that the host dragged his “bit.”

But this is nothing new for the host as one look at Kimmel’s history is enough to establish that he has a way of landing himself in the hot seat of controversies.

Kimmel’s time on the highly controversial The Man Show, which ran from 1999 to 2004, remains the most contentious phase of his life. Wrapping insane levels of sexism in layers of satire, the host indulged in everything from groping women to openly objectifying them and whatnot. Though Kimmel has left the stage of the show years ago, his not-so-hilarious jokes haven’t aged well and still attract biting criticism for the comedian.

But what actually put him on the radar of the rampant cancel culture was the resurfaced clips of his recurring sketches from the show wherein he tried to imitate NBA legend Karl Malone by wearing blackface. This took place in 2020, right when it was announced that Kimmel would be hosting the Emmy Awards. His taking the summer off at the time only added fuel to the fire, prompting the host to break his silence and extend a long overdue apology.

Though he claimed that he has “evolved and matured over the last twenty-plus years, and I hope that is evident to anyone who watches my show,” the next point only serves to highlight how that is so not true.

While Kimmel’s past words and actions at the time they originally took place didn’t raise many eyebrows, the resurfaced clips of the same have been enough to stir trouble for the late-night show host. One such video was an interview with Megan Fox in 2009 on his show Jimmy Kimmel Live! where the actress revealed how director Michael Bay went for an objectified visualization of her when she auditioned to be an extra in his film Bad Boys II at the age of 15.

He made her “dance underneath a waterfall” in a bikini, which as Fox highlighted, was the “microcosm of how Bay’s mind works.” Kimmel, instead of being sensitive and understanding the gravity of Fox’s revelation, quipped that what Bay did was “really a microcosm of how all our minds works, but some of us have the decency to repress those thoughts and pretend that they don’t exist.”

After the video resurfaced, Megan Fox fans thrashed Kimmel on Twitter and demanded that he apologize to the actress. Even if the host had planned to address the issue, the topic came to a halt after the actress came forward to defend Bay and claimed that he “never assaulted or preyed upon in what I felt was a sexual manner.”

Landing in trouble for his “killing everyone in China” skit

Post the airing of an episode of his show in 2013, Jimmy Kimmel attracted the ire of many, including Chinese-American groups who carried out multiple protests, and a White House petition — signed by over 100,000 people — demanding an apology from the host and ABC network.

The clip in question depicted children, aged 5 and 6, on an episode of Jimmy Kimmel Live! They were questioned by the comedian to think of ways to pay back the debt of $1.3 trillion dollars America owed to China. One boy pitched the suggestion to “shoot cannons all the way over and kill everyone in China,” which Kimmel called an “interesting idea.”

He then proceeded to pose the question whether “we allow the Chinese to live,” thus prompting one of the kids to chime in with a “No” while others said yes.

The segment soon triggered a massive controversy, pushing ABC to publish an apology assuring that they never intended to “upset” any community. Kimmel also apologized though he stressed that “it was obvious that I didn’t agree with that statement, but apparently it wasn’t.”

Getting labeled as a “bully” after he made Joaquin Phoenix uncomfortable

When Joaquin Phoenix appeared on Kimmel’s show to do the promotions of his film, Joker, the host played a behind-the-scenes outtake of the actor on the sets of the film chewing out cinematographer Lawrence Sher. As described by Phoenix’s publicist, the video was a “joke outtake.” But the fact that the actor looked visibly awkward after the video was played and stressed that the video was supposed to be “personal” didn’t really give the whole interview — which included other instances of Kimmel making fun of The Village star — any humorous vibes.

Phoenix’s fans were quick to come to his defense and didn’t waste any time berating Kimmel for “bullying” the actor by constantly making him feel awkward.

Earlier this year, Kimmel again got himself in a tight spot when he chatted with Emily in Paris star Ashley Park. During the episode, Park excitedly revealed how after BTS shared her cover of their famous song, “Dynamite,” she experienced a major brain fog, which she initially attributed to the shock she felt after Namjoon and Taehyung posted her song. But the next day she discovered that the extreme symptoms were the result of her having COVID-19.

In response to her anecdote, Kimmel said: “You thought it was BTS fever. They’re both very dangerous; you’re lucky to come out of those alive.”

Given the worldwide fan-following the Korean pop group enjoys — the forever loyal fandom known as ARMY — Kimmel’s words were not taken lightly and sparked a furor as they were deemed “racist and xenophobic.”

Though Jimmy Kimmel has sought forgiveness from Quinta Brunson for how he behaved at the 2022 Emmys, seeing his history of stirring controversies and getting away with half-assed apologies, we can rest assured that the late-night host is not done grabbing the headlines