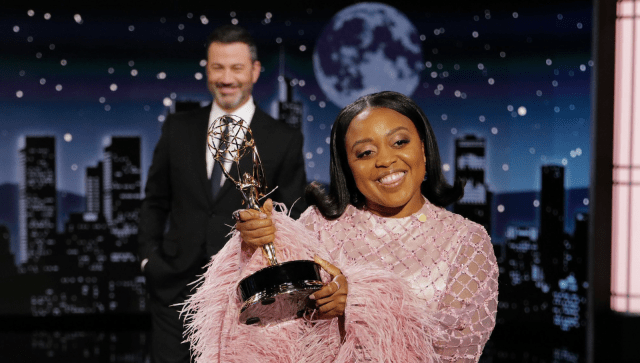 Jimmy Kimmel finally stood up and addressed why he refused to do so during Quinta Brunson‘s Emmy speech at the 2022 ceremony, but not before Brunson enacted her revenge.

On Sunday night, while Brunson accepted her Emmy for Most Outstanding Writing for a Comedy Series, Kimmel took his pretending-to-be-passed-out-drunk skit too far by, well, staying in pretend mode despite Brunson being forced to stand right over him. The Emmy was also her first, leading people online to call out Kimmel for his behavior.

Prior to the Emmys, Brunson was already scheduled to appear on Jimmy Kimmel Live! on Wednesday night and the appearance, thanks mostly to the controversy, was highly anticipated. Kimmel flat out ignored addressing the controversy Tuesday night, despite even discussing Emmy moments and mentioning Brunson’s name as his following night’s guest.

At the end of Jimmy’s monologue on Wednesday night, Quinta Brunson crashed the party.

She greeted Jimmy, before pointedly asking him about what transpired on the stage that night,

“You know how when you win an Emmy you only have 45 seconds to do an acceptance speech which is not that much time? And it’s even less time because someone does a dumb comedy bit that goes on a bit too long?”

Kimmel sarcastically responded that he has indeed heard of such things happening but then offered her as much time as she needed to give her speech, which she did.

She thanked numerous extra people including all of the fans of the show and Kimmel stood far behind her this time.

When Brunson came back minutes later as the official guest, Kimmel apologized.

“People got upset. They said I stole your moment and maybe I did. I’m sorry if I did do that. I’m sorry I did do that actually. Also, the last thing I would ever want to do is upset you because I think so much of you.”

Brunson was gracious saying “It’s very kind of you to say that. I was in such a moment.” Later adding, “Honestly. I had a good night.”

So, all is well that end’s well, it appears. We’re happy to see that Quinta and Kimmel are still on good terms and that Kimmel apologized not once but twice because he ended the interview by saying, “I’m sorry I was dumb and I got news….It’s gonna happen again.”

Let’s hope he’s ONLY referring to her winning another Emmy.