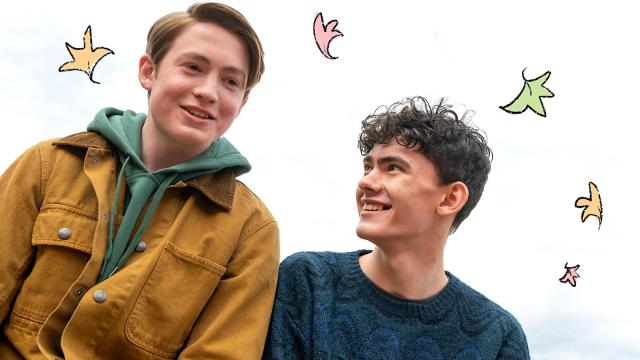 No one knew what to expect from Heartstopper when it premiered on Netflix in April 2022. An LGBTQ+ teenage coming-of-age romantic dramedy is by no stretch of the imagination a new frontier for television. And an adaptation based on a best-selling graphic novel – written and illustrated by Alice Oseman – is by no means a blueprint for success. That being said, the first season of Heartstopper defied all the odds and became an immediate bonafide pop culture phenomenon, receiving almost-instant renewal from Netflix for a second and third season.

Season one explored the budding relationship between year 10 student Charlie Spring (Joe Locke) and year 11 student Nick Nelson (Kit Connor) at Truham Grammar School for Boys. The boy-meets-boy storyline started out with a seemingly straightforward friendship but over the course of eight episodes blossomed into one of the most wholesome relationships currently on television, LGBTQ+ or otherwise.

Now that season two is officially coming to Netflix, here’s everything you need to know before it premieres, from the particularly different plot to the exciting new cast members.

Season two will see the return of all lead cast members, including lovebirds Joe Locke and Kit Connor as Charlie Spring and Nick Nelson, respectively.

Joining Locke and Conner are their on-screen best friends Elle, Tao, and Isaac, played by Yasmin Finney, William Gao, and Tobie Donovan, respectively. Additionally, Corinna Brown and Kizzy Edgell will reprise their roles as girlfriends Tara and Darcy. Rhea Norwood will also return as Imogen, the once-believed girlfriend of Nick. And you can’t have a cast without Charlie’s older sister Tori, who will once again be played by Jenny Walser.

Fans of Oseman’s graphic novel have not stopped singing high praises for the show’s casting choice, which not only knocked it out of the park by picking Locke and Conner to play its lead couple, but also depicted every character who sprung off the page and onto the screen with exceptional finesse.

Such praise included the casting of Nick’s supportive mother, Sarah, played by renowned British actress Olivia Colman. However, Netflix has not yet confirmed whether she will return for season two. Considering the plot for the new season, which you can read further below, her presence on the show, while welcome, is not necessarily required.

Who are the new cast members?

Season two will not only grow in scope but also in size. Several new actors are joining the Heartstopper family, including brand new actress Leila Khan as Higgs student Sahar Zahid. Joining her is fellow new actor Bradley Riches, who according to Netflix played a student in Season 1; he will play James McEwan, a Truham student.

Nick’s older brother David Nelson is also set to make his highly-anticipated premiere and will be played by actor Jack Barton. Nima Taleghani will fill the shoes of the fan-favorite character, Mr. Farouk, from the graphic novel. He will serve as one of two chaperones as the students embark on a new adventure in season two.

What is the plot for season two?

Netflix hasn’t revealed the official plot for season two as of this writing, but those who’ve read the graphic novel know where the story is headed — Paris, France to be exact.

The Truham Grammar School for Boys and Harvey Greene Grammar School for Girls, also known as Higgs, are headed to Paris for a week-long trip. Like any good secondary school field trip, things are about to get messy. Charlie and Nick will continue to navigate their newly official relationship, but Nick, who’s still not out of the closet to all of his friends, will grapple with how best to share the news and if he’s even ready to do so. Additionally, Tao and Elle will continue to weave, dodge, and possibly even address the latent feelings they’ve been having for each other.

If season two does follow the events of the graphic novel, it’ll mean the majority of the season will take place outside the school grounds of Truham and Higgs. In doing so, we will see different sides of the characters we thought we knew already. When all is said and done, things will be changed forever.

What is the Heartstopper season two release date?

Season one began filming in April 2021 and wrapped in June 2021, releasing the following year in April 2022. Because season two officially began production on September 23, 2022 — as mentioned in the above Instagram post — filming is likely to conclude around Dec. 2022. If the same 10 months of post-production are expected then season two likely won’t release until around October 2023.

As it remains, this is purely speculation and we will update you with definitive information as soon as it is announced.

Yes, Alice Oseman, who goes by the pronouns she and they, will return as the screenwriter and executive producer for season two. The English author created Heartstopper in 2016 when she was just 22 years old and has earned a devoted and immensely loyal fan base since then. The fifth and final volume of Heartstopper the graphic novel will be released on February 2, 2023.

Many have complimented Oseman on her ability to take the best parts of the graphic novel and turn them into viable and successfully crafted scenes. As known in the entertainment industry, not every scene in a book can be adapted to the screen in the same way. Some things don’t translate well. Oseman, who seems to have had a live-action version of her story in her head the entire time, encountered that obstacle to a lesser extent, as Heartstopper feels practically made for TV. In many ways, it excels even more than the graphic novel. Case in point: Elle and Tao’s storyline.

The series takes the best part of the graphic novel and expands on it. A scene that is just a few pictures is given dialogue. A conversation that takes up just one page is fleshed out and given context. Storylines that in hindsight could’ve been given more page time (ahem, Elle and Tao) are given the screen time it deserves.

In other words, if Oseman can keep up the work she delivered with season one, season two of Heartstopper just might find itself with another 100 percent fresh score on Rotten Tomatoes.

Heartstopper season one is currently streaming on Netflix.