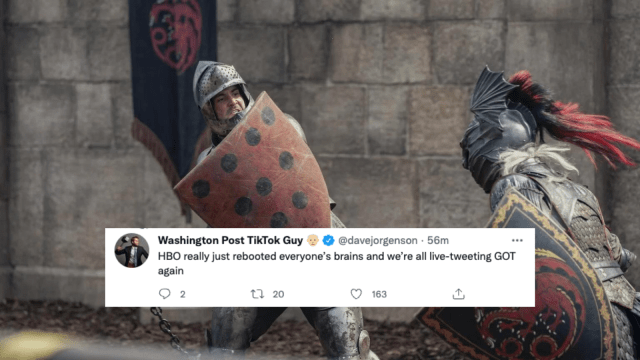 Warning: This article contains spoilers for episode one of House of the Dragon

House of the Dragon is finally here and as the show has premiered social media has lit up with fans sharing their thoughts, reactions, and of course memes related to the new Game of Thrones spin-off.

More than many of the other shows this year, House of the Dragon has seemingly accrued one of the largest social media responses with longtime fans throwing back to their favorite parallels to the original series and others just freaking out every time a callback was shown — and there were many.

If you were able to get through HBO’s technical issues and see the show for yourself, or simply have no problem with spoilers then here’s a roundup of the 15 best memes to come from the House of the Dragon premiere.

Social media had no shortage of content for fans to indulge on after just the first episode and it shouldn’t cease anytime soon as we have plenty of House of the Dragon content to come in the following weeks.

As far as first episodes go, House of the Dragon would seem to have had one of the most well-received as fans appear to be pulled straight back into the Song of Ice and Fire universe after being hurt by the rushed conclusion to Game of Thrones.

House of the Dragon will continue to air new episodes each Sunday until the season draws to a close. You can stream the first episode on HBO Max right now.