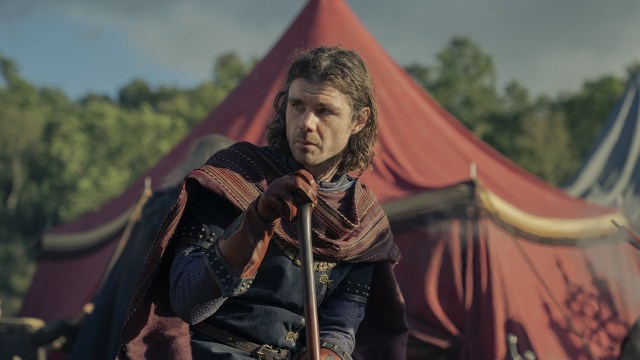 Warning: the following article contains spoilers for House of the Dragon season one, episode six “The Princess and the Queen.“

Larys Strong turned out to be one of the vilest schemers in all of House of the Dragon.

In an interview with Entertainment Weekly, showrunner Ryan Condal explains how much he relied on the source material to make him into a master schemer.

“He was fascinating in the book. We just decided that Larys was smart enough in the history to never to get himself written down into many of the accounts too much, but we knew he was a schemer. We knew he was operating in those places, but he was wise. So nobody really knew what he was actually up to. Of course, you’re only looking at what’s in the historical records. So that doesn’t mean these things didn’t happen.”

In episode six, “The Princess and the Queen,” Larys (Matthew Needham) speaks with Alicent Hightower (Olivia Cooke) who’s upset about Rhaenyra’s infidelity and her children who she believes are Harwin Strong’s (Ryan Corr) sons, not her husband Laenor’s (John Macmillan). She wishes that her father, Otto Hightower (Rhys Ifans), was back at court, and Larys takes matters into his own hands.

With both his father and son at Harrenhal, Larys hires prisoners to set the castle ablaze, killing his own family members. Thus getting revenge on Harwin and killing the Hand to the King to make way for Otto Hightower’s return. These were shocking deaths that will have dire consequences in the future.

Condal said that they also conferred with George R.R. Martin about this drastic decision and developing Larys into the devious plotter.

“We looked at what George gave us in the text. We talked to him, of course. And then we took what we knew about the character and placed him into interesting dynamics, situations that had political things to be lost and gained. How is he going to play and what is this person actually gonna do? But that’s actually a place where we had a tremendous amount of latitude because he’s so present in the book and so interesting. You just want to turn the page and read more, but there’s not much there. Because the historians didn’t really get anything on him, it gave us tons of latitude to really draw on and invent with that character.”

The book Fire & Blood isn’t all that clear when it comes to the death of the Strongs. There were rumors that it was the curse of Harrenhal that killed them, or that it was Daemon over his jealousy for Rhaenyra or Corlys because of Harwin’s relationship with his son’s wife. Larys was also a suspect and in the show; he’s been set up as someone who’s been operating in the shadows and gathering information.

Condal discussed co-showrunner Miguel Sapochnik’s exit from House of the Dragon after season one and how he foresaw this happening. In season two, Game of Thrones veteran Alan Taylor will be stepping in as executive producer and director.