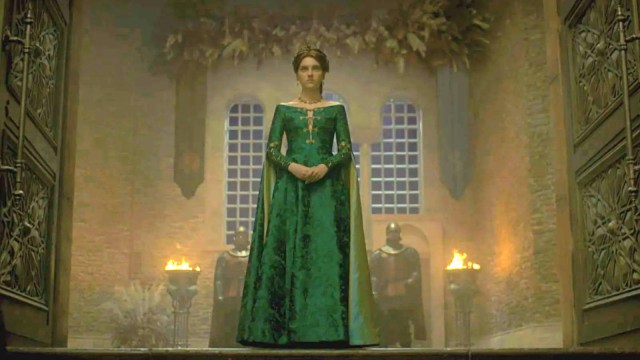 Fans were outraged when they saw an image of Alicent Hightower’s wedding dress during production, which led to the rumor that the entire wedding of King Viserys and Alicent was cut from House of the Dragon. Four weeks since episode two’s release, HOTD‘s executive producer Ryan Condal cleared the air about these rumors, clarifying there was no wedding scene to begin with.

In an interview with Entertainment Weekly, Condal said that they “never filmed a wedding” and that Emily Carey was wearing it on set because there was supposed to be a scene where young Alicent wanted to show Rhaenyra the dress she’d wear to her wedding with King Viserys. According to the executive producer, there was going to be an argument between the two friends, which would later develop into spite and betrayal that we see further on as the show progresses.

“Yeah. I mean, things fell out of every episode. We never filmed a wedding. That didn’t happen. But there was a sequence where Rhaenyra and Alicent are together and Alicent’s wearing the dress meant to imply that she’s going off at some point later to marry Rhaenyra’s father. But, look, you make creative choices all the time when you are making a show like this and you’re looking to enter and exit at the dramatic peak of things.

“Even in a scripted argument between Alicent and Rhaenyra, it felt like the look that is shared between them, the look of betrayal and hurt, and Alicent realizing how deeply she’s wounded her friend communicated so much in a visual medium that it didn’t need the barbs that were exchanged on the script level. And then knowing where we start in episode 3 with them really frosty some years later, understanding how those two different time periods are communicating with each other.”

In episode two of House of the Dragon, it was announced that King Viserys would marry Alicent Hightower after her father, Otto, ensured the two become close after the king’s former wife’s passing. After the episode aired, images of Carey wearing a wedding dress on the set spread. This led to much speculation, as fans believed that an entire wedding scene was removed from the show.

Later episodes of House of the Dragon continue to showcase the strained relationship between Alicent and Rhaenyra, and how there is still spite once the two are adults. Those who were once friends will soon become great enemies as they conspire to take down Rhaenyra before she ascends to the Iron Throne.

House of the Dragon is now available to stream on HBO Max.