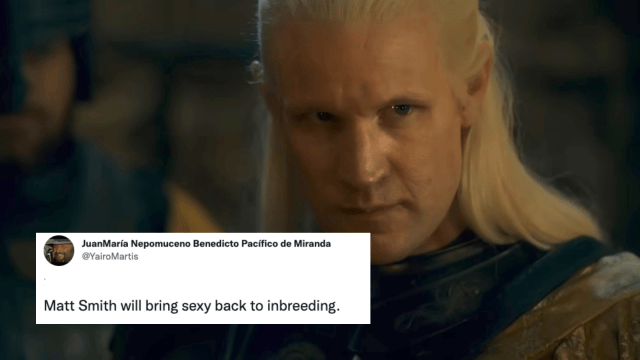 Warning: This article contains spoilers for House of the Dragon

House of the Dragon just made its debut on HBO and fans have gone wild for how episode one panned out. But aside from the fresh new take on Westeros and King’s Landing, fans are impressed by how former Doctor Who star, Matt Smith was as a Targaryen.

For those unaware, Smith is cast as Prince Daemon Targaryen, the brother of the current king, Viserys I. He’s the leader of the City Watch and was also given the title of ‘Prince of the City’. He’s seen as menacing and violent, while all he appears to want is to be next in line to sit on the Iron Throne. Fans of both Game of Thrones and Smith instantly fell in love with his new role, which they described as ‘the best casting choice’.

Other fans were both impressed and intimidated by Smith’s menacing side and believe that he is going to steal the show. And why wouldn’t he? The show tends to showcase his power and ambition. While House of the Dragon likes to focus on the main Targaryen line, any scene with Smith is powerful enough to stand on its own.

And it’s not just Twitter. The Superwholock side of Tumblr has reawakened just to witness the former Doctor become this menacing character. It’s 2010 all over again!

And of course, it’s not a Game of Thrones series without the spicy NSFW performance, and Smith did not disappoint. Fans were wooed, not just by his acting.

Matt Smith will bring sexy back to inbreeding.

House of the Dragon is the prequel to HBO’s hit fantasy series, Game of Thrones. The series stars Paddy Considine, Emma D’Arcy, and Matt Smith, and tells the story of the Targaryen family almost 200 years before the main series. Episode one, “The Heirs of the Dragon”, is now available to stream on HBO Max.