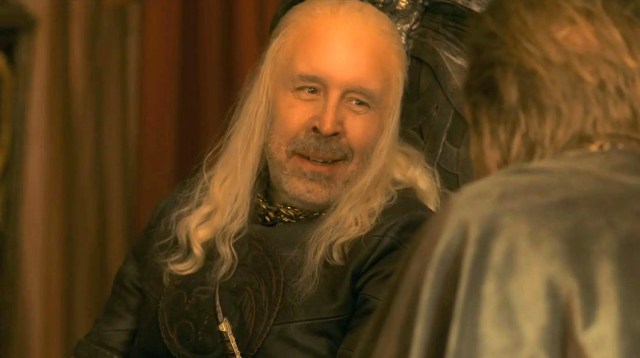 With all of these mysteries and questions piling up as House of the Dragon continues its run, some fans have picked out a peculiar dialogue from the latest episode and turned it into their next obsession.

In episode 4, just as soon as Rhaenyra sets her foot in the Red Keep, Prince Daemon comes waltzing into the throne room with a crown on his head. Viserys and his brother then make up, and the court celebrates their reunion. Outside near the Weirwood Tree, Queen Alicent invites the Rogue Prince to check out the new paintings from Norvos and Qohor, but Viserys laughs it off by saying that, being the scallywag that he is, Daemon has no interest in such things.

Unfortunately, everyone’s favorite “lonely nerd” monarch stopped us from seeing the tapestries, but fans are wondering if we’ll ever get the opportunity to glimpse them in the upcoming episodes.

A lot of people seem to share this sentiment, though some think the tapestries might end up being this show’s version of “I once brought a jackass and a honeycomb to a brothel,” never to be explained.

There appear to be some steamy tapestries already visible in Alicent’s room, or at the least the room she shares with Viserys.

Speaking of Alicent, the queen consort hasn’t missed out on anything huge, as she must see them plenty enough when staring at the ceilings. Too soon?

Wait a second, we are talking about the paintings, right?

HBO better think of something, lest they be forced to deal with #ShowUsTheTapestries in a little while.