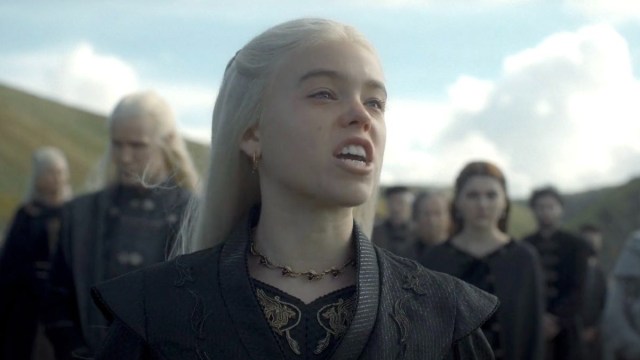 House of the Dragon has been off to a superb start, not only drawing in huge numbers for HBO but also reminding everyone of the absolute powerhouse of a television series Game of Thrones used to be once upon a time.

Now, you might think the real challenge from here on out is riding this streak to the end, but the biggest hurdle perhaps involves the huge time jump which will happen at some point in the first season, with Milly Alcock passing on the mantle of her dragon rider princess to Emma D’Arcy.

HBO’s new spinoff series has to pack several decades of history into a compelling multi-season run, so even if for nothing besides staying truthful to the source novel (George R.R. Martin’s Fire & Blood), the show must relent to numerous time jumps in the course of its narrative. The biggest one so far involves Rhaenyra and Alicent, both of whom will be replaced by Emma D’Arcy and Olivia Cooke in the next couple of episodes.

With Milly Alcock delivering such a powerful performance as Rhaenyra, a lot of fans aren’t sure about D’Arcy taking over. Are we really prepared to say goodbye to her as early as this?

Not all is lost, however, as one fan has pointed out that with Emma D’Arcy taking over, the story will become even more suspenseful.

Besides, I think it’s high time we learned not to get too attached to any character in the world of Westeros, lest we lose them in the most gruesome manner conceivable.

Since so much time passes between the junction in question, the production crew couldn’t exactly age Alcock with make-up, so it was only a matter of time before they had to move on to a new actress for future seasons. Better a clean break than that, eh?

House of the Dragon continues the next Sunday with its third episode.