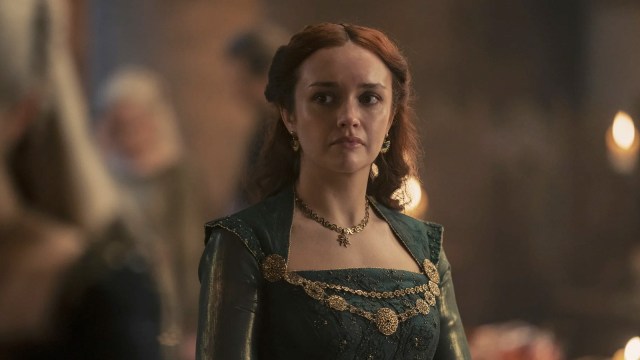 Warning: This article contains spoilers for House of the Dragon S1E9, “The Green Council.”

House of the Dragon episode nine had plenty of characters proving themselves and after almost the entire season one of them was Alicent Hightower.

Before we jump into specifics be warned that his episode will touch on spoilers from the latest episode of the show so be sure to have seen that before reading on.

In an interview with Entertainment Weekly, House of the Dragon star Eve Best, who plays Rhaenys Targaryen in the show, elaborated on the moment when she saw Alicent prove herself in the series’ penultimate episode.

Best says that, during the scene where Alicent comes to her pleading for her support in installing Aegon II Targaryen to the throne, the conversation that the pair share changes how Rhaenys looks at Alicent.

“Alicent really proves herself in that scene. I think Rhaenys had taken her very much for granted as somebody who doesn’t really need to be paid attention to, and she shows herself to be somebody actually to be reckoned with. I think there’s a kind of mutual respect that happens as a result of that scene. It’s two women living through the appalling treatment, abuse, repression, oppression, the horrors of this patriarchal system. They see eye to eye, they understand, they empathize.

It not only takes Rhaenys’ breath completely away, but I think it’s the first time, almost in her life really, that she feels truly vulnerable and taken aback. Alicent has just spoken directly to her heart, and in that moment it feels like the roles are completely reversed and Rhaenys is, for a moment, like a young child. Alicent’s the only one who’s seen her.”

It would seem that the conversation shared between the two characters had a big impact on Rhaenys which can be seen in the episode’s climax where she chooses to spare the lives of Alicent and her family.

Perhaps this respect will carry on in the future but we’ll have to wait and see as the Dance of the Dragons kicks into full swing next episode. House of the Dragon will be back with its season finale next Sunday on HBO Max.