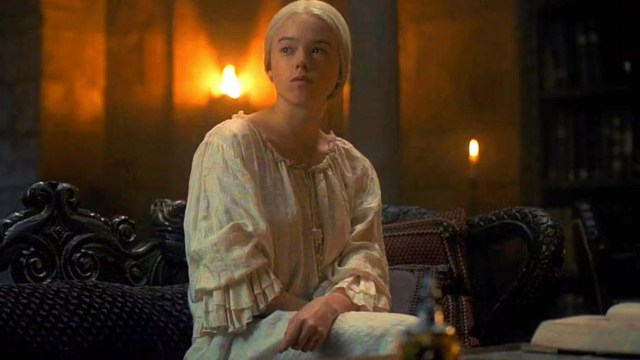 Major spoilers for episode four of House of the Dragon.

The fourth episode of House of the Dragon named “King of the Narrow Sea” surpassed its predecessors in its portrayal of the rebellious side of Princess Rhaenyra (Milly Alcock) that was not thoroughly explored before.

The episode also focused on the return of Prince Daemon (Matt Smith) back to the King’s Landing after freeing the Stepstones from the clutches of the Crabfeeder. Only this time his infamous tactlessness and uncontrolled aggression in defeating his enemy received the approval from his elder brother, King Viserys (Paddy Considine), as well as accolades and encouragement from the council members.

While Daemon acquired a new position as a popular favorite, Rhaenyra’s wilfulness and non-conformism in marrying and settling down earned her disapproval and disappointment from her father. The episode ends with Maester Mellos handing her a cup of brewed ‘Moon Tea’ sent by the king. What exactly is the moon tea, and why did the king send it over to Rhaenyra? Let’s delve into the details.

What led Viserys to send the Moon Tea to Rhaenyra?

Fans are introduced to the future monarch of Westeros’ wild side when she sneaks out of the palace and wanders the narrow streets of Westeros, accompanied by her uncle Daemon.

As unsuitable as the streets are for the tender steps and delicate lifestyle of a crown princess, Rhaenyra breaks all the rules by disguising as a boy and following her uncle to various places that are generally considered unbecoming for a princess to venture into, as per the stringent Westerosi customs.

The pair happen to encounter a street play that openly lampoons Rhaenyra’s selection as the crown’s heir. This scene is significant as her rebellious act of escaping at night is set alongside a negative popular perception of a potential female monarch. In the very next scene, Daemon takes her to a brothel and begins to seduce her, which she readily accepts.

The scene introduces the audience to a typical Targaryen incestuous practice that had only been heard about in Game of Thrones, until Dany and Jon Snow’s romantic engagements later. As both indulge in sexual intimacy, Rhaenyra tries to take charge of the moment causing Daemon to leave her and walk out of their shared moment of bliss.

This propelles her to go back to the palace and lose her virginity to the Kingsguard Criston Cole (Fabien Frankel) who she seduced earlier that night. Unfortunately the story doesn’t end here, as King’s Hand Otto Hightower’s (Rhys Ifans) messenger, who was a witness to the uncle and the niece’s sexual union the night before, narrates the whole incident to the king afterwards.

Confronted by Viserys, the duo gave different responses to the account. While Daemon claims to have had sex with Rhaenyra and asked for her hand in marriage, the latter denied the allegations. Later that night, Viserys delivers a specially brewed moon tea to his daughter.

The potion is a form of birth control used to prevent any unwanted pregnancies. Here, the king’s action reflects either his disbelief in Rhaenyra’s denial of engaging in sexual intercourse with Daemon (given her rebellious nature to trespass the assigned social customs), or his paranoia about not taking any risk that might complicate and threaten his status as a respectable ruler.

What does the Moon tea signify?

In the world of House of the Dragon and Game of Thrones, moon tea is considered quite a significant item of consumption. This is because of the power and ability that the drink holds in strengthening and maintaining Westeros’ social balance, which is done by restraining female sexuality and retaining the gender hierarchy. What can be more effective than terminating a pregnancy that refuses to align with the social order? Both series’ are laden with incidents and events that could be used as examples for explaining the sexual politics that pervade the vast expanse of Westeros.

The conversation between Viserys and Rhaenyra towards the end says quite a lot about the responsibility thrusted on the high-born women of the era to maintain their honor and virtue by not transgressing the prescribed social and sexual rules. When Rhaenyra admitted her innocence, Viserys replied: “The truth does not matter, Rhaenyra. Only perception. You have exposed yourself. Now we must both suffer the consequences”. On attempting to put forward her side of the argument, he replied: “You are my political headache.”

While the conversation was about how important it is for women to maintain and showcase their chastity, this also goes on to mean how female sexuality is politicized as women of Westeros are only meant to bear children or to procure a male heir. Sex is a duty solely meant for reproductive purposes for them, a role that is quietly fulfilled by both Alicent Hightower (Olivia Cooke) and Aemma Targaryen in the first episode.

Therefore, the moon tea reflecting Viserys’ anxiety signifies attempts at controlling the outcomes of the female sexual transgressions of which Rhaenyra is accused. The function of the potion, therefore, is to keep the sexual division of labor intact that aligns with channelizing female sexuality to suit the political needs of the country.

Does the Moon tea confirm Rhaenyra’s position as the future heir?

The tea and Viserys’ action to send it to Rhaenyra also confirms the former’s intention to stay true to his words concerning his decision to keep Rhaenyra as the appointed heir. During their confrontation, Viserys said: “Jaehaerys would have disinherited you” criticizing Rhaenyra’s act of prioritizing her sexual desires over her duty.

Though the scene and the conversations, as weighty as they are, can be cast off as snippets of disagreements between a father and a daughter, it signals Viserys’ intention to retain his daughter’s position. The very last scene showing the delivery of the moon tea can be interpreted as his action in stopping an occurrence (Rhaenyra’s pregnancy) that might force him to disinherit her.

After all, who would support a woman’s claim to the throne who will unashamedly give birth to a baby out of the wedlock? In this case, these were the same folks who had vehemently criticized the very idea of a potential female monarch.

It seems like the king’s action of sending the tea was a cautionary step on his part to keep the most fearful truth from coming out. His decision to dethrone Otto Hightower at Rhaenyra’s request is a clear testimony to how much he values the princess’ opinions, confirming his belief in her potential as a future monarch. Let’s wait and see how long that faith stays strong and secure.