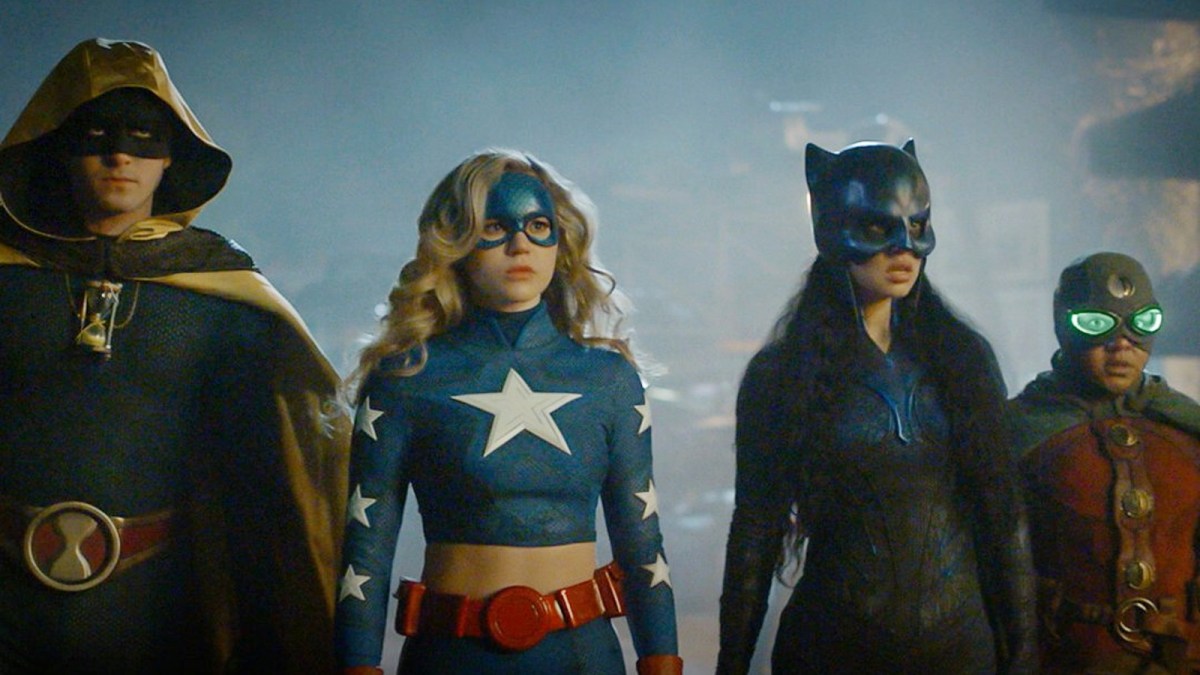 After three seasons on The CW, DC’s Stargirl comes to an end and ties up a mystery that’s been lingering since the beginning.

Fans expressed their sorrow for Stargirl‘s cancellation after the penultimate episode. Season three has been filled with emotional moments and big plot twists that have been building for a long time, and there’s still so much story left to tell. Unfortunately, with all the changes happening at The CW, most of its programming lineup has been axed, but at least Stargirl ended with a Big Bang.

The theme of season three has been about “frenemies,” with several of Courtney Whitmore/Stargirl’s (Brec Bassinger) villains, including Sportsmaster (Neil Hopkins), Tigress (Joy Osmanski), Shiv (Meg Delacy), and Shade (Jonathan Cake) seemingly turning over new leaves and no longer fighting for the bad side. Sylvester Pemberton/Starman (Joel Mchale), was killed in the series premiere along with his other Justice Society of America members, at the hands of the Injustice Society of America, but mysteriously came back in season three to help Stargirl and her new JSA. There’s a murder killing the villains in Blue Valley and it’s up to the team of heroes to find out who it is.

Who is the real Starman?

Sylvester doesn’t agree with Courtney giving these villains another chance, and he speaks out about it many times throughout the season. We discover in Stargirl, season three, episode twelve, “The Last Will and Testament of Sylvester Pemberton,” that Sylvester isn’t actually Sylvester. He’s the albino, super-genius gorilla Ultra-Humanite, and he’s been leading the team astray from the inside this whole time. Pat Dugan (Luke Wilson) learns this too late, and Starman defeats him, ties him up, and buries him alive.

The finale episode, “The Reckoning,” shows how this process was completed. Icicle (Neil Jackson) and Dragon King (Nelson Lee) are at the original Sylvester’s gravesite and they dig up his body. He’s taken to a laboratory and he’s told by Icicle that he’s been resurrected because he’s a trusted and beloved hero that Americans will listen to. Icicle tried to control the population back in season one as part of “Project New America,” and now he plans on using the star-spangled JSA hero as his personal mouthpiece by switching his brain with the Ultra-Humanite. The other part of this operation is that Dragon King’s brain is put inside Ultra-Humanite’s body, since it’s a stronger vessel.

After Pat goes missing, Courtney talks with her team and realizes that “Sylvester” has been leading all of them astray. Sylvester gave them bad advice to keep them distracted and break them apart. He was able to take Courtney’s cosmic staff from her, leaving her powerless against the threats mounting against them. They get a call from Icicle’s son Icicle Jr., and she’s told to go to the junkyard if she wants to find Starman.

The JSA shows up at the junkyard and they confront Starman, Icicle, Icicle Jr., and Icicle’s ice-powered and elderly mother and father. Starman tells them that Pat died looking for the Ultra-Humanite and killed him. Icicle says that they need to team up to beat them, but Stargirl knows their game and it’s clear that the returned Icicle has been the one killing the villains. Starman’s been lying since he came to Blue Valley. Icicle Jr. tries to use their relationship in his favor by telling her to trust them, but Pat arrives using his giant robot S.T.R.I.P.E. (thanks to a trick taught to him by Dr. Weerd to disjoint his thumbs to slip any restraint), the truth is revealed. A brawl ensues with the JSA battling the villains with some slick choreography.

At the same time, Shiv, Mike Dugan (Trae Romano), and Jakeem Thunder (Alkoyo Brunson) exit a secret laboratory after discovering that Dragon King’s (Shiv’s father) brain has been put into Ultra-Humanite. They arrive at a tire shop and Ultra-Humanite appears. He tries to win over his daughter, but Shiv isn’t having it. She launches at the gorilla with all the rage she’s had building since her traumatic childhood. Ultra-Humanite pins Shiv down, and Jakeem Thunder uses his magical pen to turn the gorilla into a stuffed animal, while also revealing his love for her.

At the junkyard, Starman fights S.T.R.I.P.E. using the cosmic staff and he seems too powerful for Pat. Cameron Mahkent/Icicle Jr. (Hunter Sansone) has a hard time watching his father fight Stargirl and he tries to stop it. Courtney’s mother Barbara (Amy Smart) enters the fray (with crossbow skills she learned from Tigress) and gives Stargirl the pep talk she needs to regain control of the staff. She commands the cosmic staff back to her because she believes herself worthy.

Pat fights Starman, and without the staff, he’s able to take him down, hitting him over the head with a rock. Stargirl blasts away Icicle and when he tries to retaliate, Icicle Jr. gets in his way and sends a blast of ice shards at him. Icicle turns into a giant, frosty cloud and soars away. Icicle Jr.’s grandfather decided not to fight, and Icicle Jr. takes him away to get help and feels guilty for having betrayed everyone.

Sympathy for the villains

Back at Courtney’s house, she gives the cosmic staff the option of staying with her and it chooses its crate. Courtney and Pat have a heart-to-heart and she tells him that she stood up for him and how much he meant to her after Ultra-Humanite put him down. Pat puts an arm around her and thanks her because he heard every word. Their relationship was difficult in the beginning because Courtney didn’t want a stepfather, but their heroics brought them together.

Rick Tyler/Hourman (Cameron Gellman) apologizes for how he spoke to Beth Chapel/Dr. Mid-Nite’s (Anjelika Washington) parents when under the influence of his extended super-strength. Beth then asks her parents to officially join the team and they already have ideas for a new costume. At Starman’s bedside, Courtney and Pat are told that Sylvester’s body is fine, but the Ultra-Humanite is brain-dead. The heroes think that the original Starman’s brain could be out there just in case they’re able to bring him back. It then cuts to a laboratory where Sylvester’s brain is in a machine asking for Pat.

Rick goes to the gravesite of the monstrous zombie Solomon Grundy that he formed an attachment to in season two and expresses how much he misses him. Solomon was responsible for killing his parents, but he was controlled by the ISA so he wasn’t to blame. The zombie represented Rick’s own anger that he tried to get ahold of. When Rick steps back, Solomon’s hand bursts out of the ground and he smiles in relief. At night, Everyone’s together at Courtney’s house celebrating, including Shiv, and Yolanda calls her parents to tell them that she’s a hero. There’s been friction between them because they disapproved of the mature pictures that were exposed, and Yolanda hopes that confessing this will bring them together.

In Copenhagen, Denmark, Icicle is walking around until his feet get stuck in petroleum jelly, laced with special chemicals. Artemis (Stella Smith), Sportsmaster and Tigress’ daughter, stands above him on a ledge to seek revenge for him killing her parents. She tosses a flame onto the substance and it burns Icicle alive.

Mike gets a reunion with his mom, who’s a waitress at a restaurant, and when he returns, he refers to Barbara as his mom, letting her know how much she means to him. Courtney goes to Becky’s house, the daughter of the Gambler who was killed at the beginning of the season, gives her the letter he wrote for her, fulfilling his wish and keeping in line with the theme of forgiveness.

Courtney goes to Cameron’s house and stares at it sorrowfully It starts to snow and she turns around to find Cameron standing there. He asks if she can help him and they embrace in a hug. It proves that he too can be saved from his villainous path. Courtney looks up happily at the sky after reuniting with her love.

The final scene takes place ten years in the future. Shade is conducting a tour of the JSA museum and he shows the visitors the legendary meeting table. He names Starwoman, Wildcat, Jade, Obsidian, Dragon Queen, S.T.R.I.P.E. 2.0, Jakeem Thunder, Icicle, Artemis, Sand, Damage, Hourman, and Dr. Mid-Nite. Shade says Hourman and Dr. Mid-Nite are getting married soon and recalls their good deeds: they stopped the ISA from brainwashing America, they stopped Eclipso from unleashing his nightmarish world, and they defeated Ultra-Humanite before they could tarnish Starman’s legacy. They also brought the real Sylvester back and rescued the Seven Soldiers of Victory from the cosmic deity called the Nebula Man.

Shade looks at the table and calls them the greatest heroes the world has ever seen, but there will be a new generation to come in and continue the legacy of rising up against evil. Suddenly, a portal opens up and Jay Garrick/Flash (John Wesley Shipp) races through it, splitting the table in half. He says that the JSA is needed and Shade needs to gather the troops. Their adventures are not over.