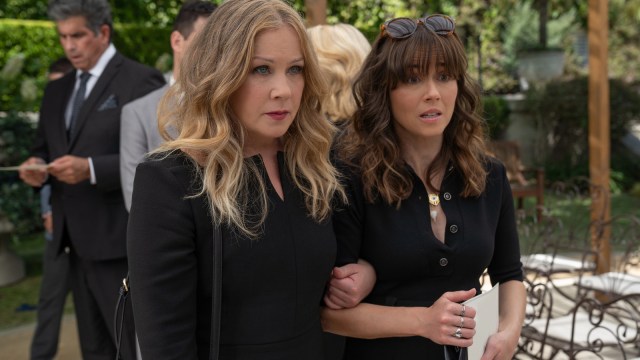 Warning: This article contains full spoilers for Dead to Me season three.

After, two and a half years away from screens, Dead to Me has finally returned to Netflix for its third and final season. It’s been an uphill battle to produce the acclaimed black comedy’s last run, as production was initially delayed due to the pandemic and then again once Christina Applegate was diagnosed with MS. At least we can now say for sure that everyone’s hard work paid off as season three is a truly exceptional season of television.

Dead to Me has never given its characters an easy time of it, but these 10 episodes are easily the most emotionally charged for both those on screen and those of us watching, all leading up to one heck of a series finale. For years now, fans have been wondering whether Jen and Judy would ultimately be able to avoid recompense for their (mostly understandable) misdeeds and get a happy ending. Well, now we know.

Want to find out how everything ended on Dead to Me? Or maybe you’ve seen the episode but still need to wrap your head around all the drama. Either way, let’s unpack the series finale.

Unpacking the Dead to Me series finale

Hoo boy, did season three really put Jen and Judy through the ringer. Following on from the car crash at the end of season two, Judy discovered some devastating news after going in for a routine scan: she had Stage four cervical cancer, a diagnosis that hit Jen just as hard as it did Judy as she couldn’t imagine life without her best friend.

Over the course of the season, then, the two women learn to come to terms with Judy’s illness, which tragically proves to be terminal, in their own ways. Meanwhile, Jen is blindsided by some very different medical news of her own — she’s pregnant with Ben’s child! You remember Ben, right? The twin brother of Steve, Judy’s ex that Jen killed, who ends up going to jail for the aforementioned hit and run incident.

As for the investigation into Steve’s death, that heats up with tenacious FBI agent Glenn Moranis comes to town and zeroes in on Jen. Everything comes to a head in the penultimate episode as a zen Judy, having come to terms with her death, “confesses” to Nick that she killed Steve. Nick and Detective Perez debate whether to report Judy’s confession to Moranis, only to find the FBI guy murdered.

So, the series finale begins with Jen and Judy deciding to run from their problems by spending a three-week vacation in Mexico, at Steve’s old beach house. On the journey, the pair are set upon by murderous Greek Mafia goons, but a fearless, surprisingly badass Judy manages to send them packing. As they reach Mexico, a montage recaps the precious, happy time the two women spend together.

This includes the pair discovering that Steve rebuilt Judy’s ’66 Mustang, the car that killed Jen’s husband Ted, kicking off the whole story in the first place. After a brief health scare, Jen realizes how much she actually wants her baby and finally tells Ben she is pregnant. In the same phone call, she learns of Moranis’ death, at the hands of the Greek Mafia, which has led the police to suspect them of killing Steve, at last letting Jen and Judy off the hook.

But sadly it’s not all good news and Jen is brought back to reality when, that night, Judy admits she won’t be returning to Laguna and wants to live out the remainder of her time by the beach. The next morning, Jen wakes up to find Judy has walked off into the ocean and she understands that her best friend has gone.

Jen returns home, in Judy’s Mustang, just in time for Henry’s choir concert, which is decorated with the paper cranes Judy made during her chemotherapy treatment. Ben surprises her by showing up at the church, revealing his sentence was reduced due to good behavior. We then flash forward to after Jen gives birth and are introduced to her baby daughter Joey.

An additional flash forward shows Jen, Joey, her two sons Charlie and Henry, and Ben enjoying family time by the pool (the same pool Steve once drowned in). Although Jen’s life now seems to be in a perfect place, one last pang of guilt leads her to drop a truth bomb on Ben. “I have to tell you something,” Jen admits, before the screen cuts to black.

All in all, the Dead to Me finale is an emotional rollercoaster that is the very definition of bittersweet. What’s more, it finishes on a killer cliffhanger as we’re left to ponder how Ben will react to finally finding out the truth about Jen’s crimes. To start again from the beginning, go watch the entirety of Dead to Me on Netflix.