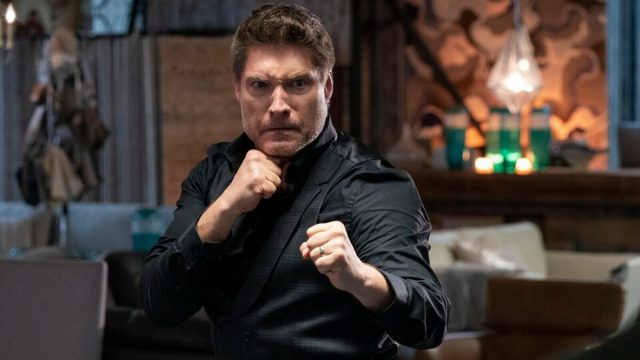 One of the best things about Cobra Kai is how it has brought back so many characters from the original Karate Kid movies in unexpected ways, updating and fleshing them out as we find out how they’ve changed — or, in some cases, not changed — since 30 years ago. The hit Netflix show did this once again in its just-debuted fifth season with the return of Mike Barnes (Sean Kanan).

Mike was originally the secondary antagonist of The Karate Kid Part III and is arguably the most vicious opponent Daniel LaRusso (Ralph Macchio) faced at the All-Valley Karate Tournament. Ahead of season five, then, fans fully expected Mike to team up with arch-villain Terry Silver (Thomas Ian Griffith) for a second time to create misery for the Miyagi-Do sensei. However, the series actually find a very different — and much more fulfilling — way to bring him back.

Once Daniel discovers Terry is looking to reach out to some “old friends,” he assumes Mike would be at the top of the list and so tracks his old enemy down. Except it turns out that Barnes has turned over a whole new leaf since they last met. After being banned from karate following the events of Part III, Mike ended up in the carpentry trade and now owns a furniture store and is extremely regretful of his youthful transgressions.

Unfortunately for him, Silver traces the information Mike gives to Daniel back to him and burns down his furniture store. Mike then vanishes from the scene after episode three and doesn’t return until the season finale, where it’s revealed he’s looking for revenge on Daniel for ruining his life. Having lost his store, Mike is now flat-broke and it’s implied his wife left him. LaRusso is able to make him see that Silver is the real enemy, which causes Mike to storm off to Terry’s mansion with Johnny (William Zabka) and Chozen (Yuji Okumoto).

The trio’s siege on Silver’s place almost ends in disaster, but thanks to the kids of Miyagi-Do outing Terry’s crimes to the world, the day is saved. When Mike is last seen, he’s made off with a Rembrandt painting belonging to Silver, figuring it’s satisfactory compensation after what the Cobra Kai founder did to his store.

It got rough for a hot minute there, but seeing as Daniel and Mike have become unlikely allies, here’s hoping Sean Kanan reprises his role once more in Cobra Kai season six.