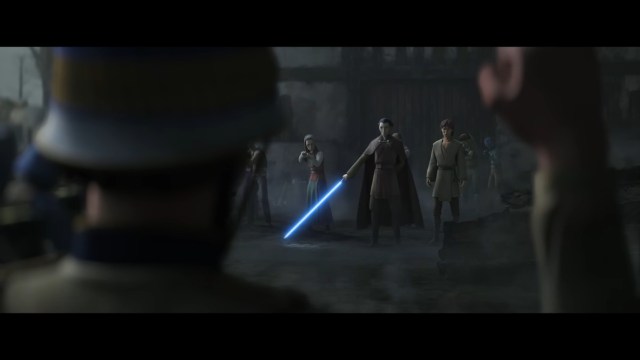 In the past few years, the Star Wars franchise has proven to be a clear winner over at the streaming service Disney Plus, with The Mandalorian’s “Baby Yoda” proving to be an instant pop culture sensation and the premiere episode of the prequel series Obi-Wan logging over eight billion minutes streamed on launch. So it’s no surprise that Disney has hired the Mandalorian showrunner Dave Filoni to write and produce a new animated series, Tales of the Jedi.

Tales of the Jedi will be an anthology series, produced in the same style as Filoni’s previous animated hit, Star Wars: The Clone Wars. Like The Clone Wars, the series will focus on the adventures of Jedis during the era that George Lucas’ prequel film trilogy was set, and will feature some of the same stars including Ian McDiarmid as Senator Palpatine.

Liam Neeson will return as Jedi master Qui-Gon Jinn, with his son Michael Richardson playing the younger version of his character.

Reprising their roles from The Clone Wars will be Matt Lanter as Anakin Skywalker, and Ashley Eckstein as Tano.

The series will have six episodes, each between 17 and 19 minutes in length. Disney Plus has revealed that the first episode, “Life and Death,” will begin with the birth of fan-favorite character Ahsoka Tano. The full episode title list is: