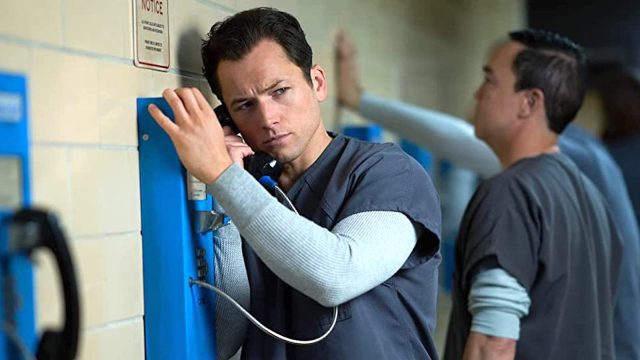 The true-crime genre has exploded with breakout hits like Inventing Anna, The Dropout, and The Tinder Swindler taking the world by storm. Now, there’s a new show on the block. This time it’s about a suspected serial killer.

Black Bird on Apple TV Plus is about a young man named Jimmy Keene who is sentenced to 10 years in prison for dealing drugs and being in possession of assault weapons, among other charges. While behind bars he’s approached by the prosecutor who put him there with a proposition that could offer him his freedom. All he has to do is check into a maximum security prison, befriend a suspected serial killer, and elicit a confession out of him.

The limited series is receiving high praise for its well-crafted tension, top-notch writing, and high-profile cast, which includes Rocketman‘s Taron Egerton and the late, great Ray Liotta. The series currently holds a Rotten Tomatoes score of 98 percent, and has shown no indication of dropping anytime soon. The show is also receiving attention for its sometimes unbelievable plot, making the legend at the top of every episode — “The following is inspired by a true story” — seem less and less possible.

Is Black Bird actually based on a true story?

Although it may not seem like it at times, Black Bird is indeed based on a true story. Jimmy Keene was a real inmate sentenced to 10 years behind bars who was approached by the Feds with the potential for freedom in return for eliciting a confession from a suspected serial killer.

The suspected serial killer, Larry Hall, is currently serving life behind bars at the United States Medical Center for Federal Prisoners in Springfield, Missouri, for the kidnapping of 15-year-old Jessica Roach. He was suspected of killing 14 other women when the Feds approached Keene about trying to elicit a confession, including 19-year-old Tricia Reitler.

While behind bars, Jimmy Keene was able to swindle a confession out of Hall, but not enough to nail him to the murders of Roach or Reitler, nor the countless other victims he was suspected of killing. To this day, he has never been convicted of murder even though he confessed to the abduction, rape, and strangling of 15-year-old Roach. He later recounted the confession. In 2011, experts close to CNN said Hall “may have killed up to 40 women.”

New episodes of the chilling Apple TV Plus series air every Friday, with the last and final episode expected to air on Friday August 5.