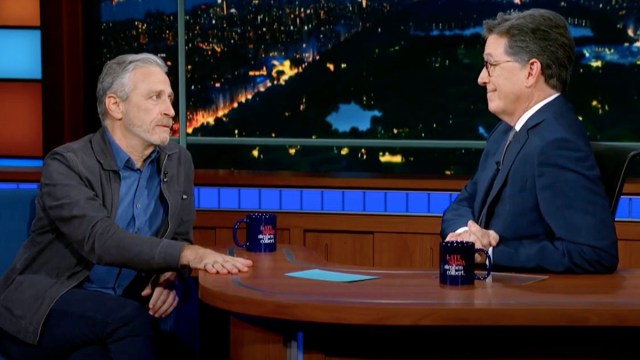 Jon Stewart paid a visit to his old friend Stephen Colbert on Tuesday night’s Late Show, where he got into the nitty-gritty over Dave Chappelle and his Saturday Night Live monologue over the weekend that many are calling antisemitic. But it was Colbert who was in the hot seat for much of the interview.

In Chappelle’s 15-minute monologue, which he reportedly switched out between dress rehearsal and the live show, the 49-year-old comedian delved into the Kayne West backlash — admonishing Ye not for his recent remarks about the Jewish community — but in the manner in which he decided to do so.

“I renounce antisemitism in all its forms and stand with my friends in the Jewish community. And that, Kanye, is how you buy yourself some time,” Chappelle quipped, just for starters. Not shockingly, his remarks were quickly put on blast by the Anti-Defamation League, which accused Chappelle of “normalizing” antisemitism.

“We shouldn’t expect Dave Chappelle to serve as society’s moral compass, but disturbing to see [SNL] not just normalize but popularize antisemitism,” tweeted the organization’s CEO, Jonathan Greenblatt. “Why are Jewish sensitivities denied or diminished at almost every turn? Why does our trauma trigger applause?”

Not wholly surprisingly, Stewart, who often plays a devil’s advocate, had a different take on the backlash surrounding Chappelle, Kanye, and NBA star Kyrie Irving, who was recently suspended over antisemitic tweets.

“Everybody calls me like, ‘You see Dave on SNL?’ And I say yes, we’re very good friends. I always watch and send nice texts,” Stewart recalled. “‘He normalized antisemitism with the monologue.’ I don’t know if you’ve been on comment sections on most news articles, but it’s pretty normal. It’s incredibly normal. But the one thing I will say is I don’t believe that censorship and penalties are the way to end antisemitism or to gain understanding. I don’t believe in that. And I think it’s the wrong way for us to approach it.”

After joking about how Irving’s real punishment should be “sending him to the Knicks,” Stewart got down to brass tacks — as Colbert sat there looking mildly uncomfortable, to put it gently.

“But in all seriousness, penalizing someone for having a thought, I don’t think is the way to change their minds to gain understanding,” he continued. “This is a grown-ass man. The idea that you would say to him, ‘We’re going to put you in a timeout. You have to sit in the corner and stare at the wall until you no longer believe that the Jews control the international banking system.'”

After some back and forth between the two about how people should react to antisemitic remarks, Stewart pointed to something Ye said in one of his recent press appearances.

“He said something fascinating in my mind, he said, ‘Hurt people hurt people,'” Stewart recalled. “And if the point of all this is then to heal people, the only way to heal a wound is to open it up and cleanse it, and that stings. That hurts, but you have to expose it to air, and I’m afraid that the general tenor of conversation in this country is to cover it up, bury it, put it to the outskirts and don’t deal with it.”

The point Stewart seems to be making is that you can’t deal with antisemitism head-on without confronting the fact that it exists, which is certainly one way of looking at it.

“Dave said something in the SNL monologue that I thought was constructive as well, he said ‘It shouldn’t be this hard to talk about things,'” he continued, reiterating that a large portion of the country feels that Jews control everything.

“I’m called antisemitic because I’m against Israel’s treatment of Palestinians,” Stewart went on. “I’m called other things from other people based on other opinions that I have, but those shut down debate … Whether it be comedy or discussion or anything else, if we don’t have the wherewithal to meet each other with what’s reality? Then how do we move forward, is my question.”

“If we all just shut it down, then we retreat to our little corners of misinformation and it metastasizes,” he added. “And the whole point of all this is to not let it metastasize and to get it out in the air and talk about it.”

“Like, I know you don’t like Jews,” he then quipped to Colbert, finally breaking the tension. “I see it in your eyes.”

“I don’t disagree with you, Jon,” Colbert said, responding to the swath of his friend’s comments, after some continued playful back and forth. “I just want to say that I condemn antisemitism and I stand with all of my friends in the Jewish community — a counterpoint.”

Thankfully, at that point, Colbert cut to a much-welcomed commercial break before things could get more awkward.