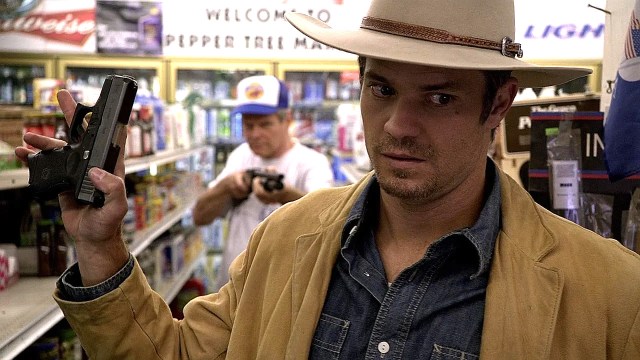 It sounds like the sort of high-stakes escapade Timothy Olyphant’s Raylan Givens would find himself caught up in, but life can often be much stranger than fiction, with sequel series Justified: City Primeval halting production in Chicago after two cars that were engaged in a running gun battle crashed through the barricades being used to cordon off the set.

Per Deadline, the altercation happened on Wednesday night, but the details are only now being made public. Nobody was injured, but police were on site to comb for evidence, with shell casings being discovered on the location. Naturally, the cast and crew who were present at the time (which included star and producer Olyphant) immediately ducked for cover during the incident near Douglas Park.

The original six-season favorite was famed for its regular bouts of pistol-assisted violence, with Deputy U.S. Marshal Givens taking out his fair share of bad guys with his trusty pistol, and he was caught in the crossfire just as much. Fortunately, everyone close by managed to stay out of harm’s way, but the thought of a vehicular gunfight breaking out in the middle of a high-profile production is positively insane.

Justified: City Primeval will be looking to resume normality in the aftermath of such bizarre events, with the limited series set to pick up eight years after the finale. Raylan is trying his best to find a work/life balance, but the scales tip in favor of the former when he gets drawn into a new case that finds him on the hunt for a dangerous felon known as the Oklahoma Wildman.