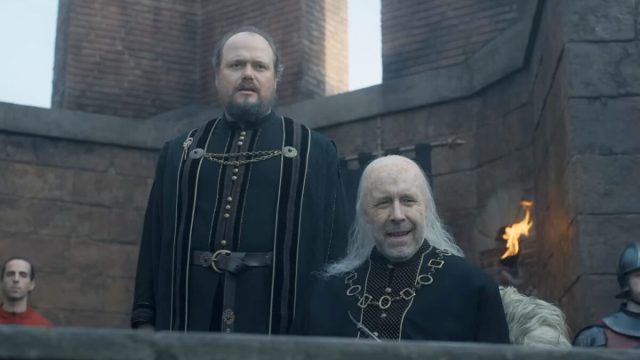 House of the Dragon fans are still recovering from that brutal royal wedding, on-brand for Game of Thrones, if only a little distasteful for the people involved. Now, as we pick up the pieces Ser Criston Cole and Princess Rhaenyra Targaryen left, the audiences contemplate several important issues, one of which is the fact that they can’t help but be reminded of a certain Shrek character whenever Jason Lannister comes onscreen.

Oh, and the fandom is also continuing to shower Daemon Targaryen with a lot of love, even if the protagonist did kill his wife Lady Rhea Royce in the latest episode. Sometimes, you just can’t beat charisma.

Not enough people, at least not enough to suit our nerdy incliations, talk about how difficult it is to get out of Medieval apparel when things get hot and heavy. House of the Dragon star Fabien Frankel was willing to address this issue once and for all, at least to the extent that it doesn’t take away from the scene’s suspension of disbelief. We hardly think Ser Criston’s armor should’ve come off that easily without a squire to help him out of it, but hey, at least the show acknowledged such a thing exists. We remember the last time a Medieval or fantasy show did such a thing, and it was, oh, right… never.

Did we have another time jump between episodes four and five?

Even if Emma D’Arcy and Olivia Cooke have yet to make their debuts as older versions of Rhaenyra and Alicent, House of the Dragon has been no stranger to time jumps over the past couple of weeks. Granted, the biggest one is yet to come, but we’ve still bounded over a few years in between episodes. So, we suppose the question is: was there another time jump between episodes four and five? We tried to answer that as best as we can, but the HBO prequel series could really do with some time stamps.

Remember the time when people would constantly compare the long-haired Jaime Lannister with Prince Charming from Shrek? Well, it seems that his ancestor, Jason Lannister, is also finding himself on the unfortunate end of that observation. Is it just the simple fact that Lannisters resemble the self-obsessed princeling? The characteristics seem to ring true: the self-importance, the arrogance that comes from wealth, the spitting image of cruel Medieval royalty. Let’s stop the analogy right there and not look for any fairy godmothers, please.

Barring his brother Viserys, Daemon Targaryen is everyone’s favorite character from the House ensemble, and even though he might showcase cruel incliations from time to time, we can’t get enough of his mischievous nature, causing trouble whenever he arrives in King’s Landing. The man just can’t help it, which makes his character all the more hilarious in the community’s eyes.

That’s all we have for you today, but check back in tomorrow at the same time for another Game of Thrones roundup.