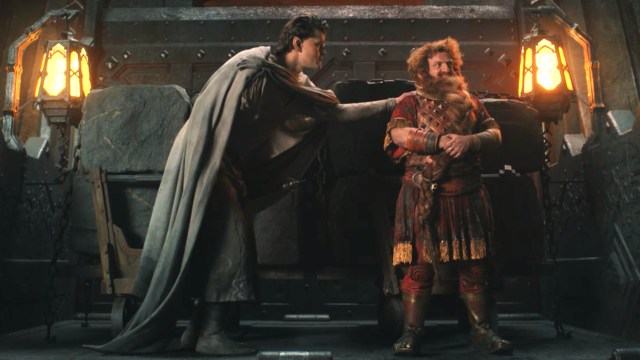 The Lord of the Rings: The Rings of Power provides fans with endless fodder for debate with each fresh episode of the Amazon Prime series.

The characters in Prime’s unfurling Middle-earth tale are becoming increasingly popular among fans, as the show strives to enrich its expansive story with small, intimate moments and long-established bonds. One relationship, in particular, is drawing viewers in, as they absolutely melt in the face of Elrond and Durin’s steadfast and enduring friendship. It might even be enough to knock Legolas and Gimli from the pedestal they claimed long ago.

The pair’s popularity is bolstered by the ability of Rings to indulge in those simple, human moments between friends. The show takes care in establishing the foundations of its story, and they are reflected in its every detail— from its eye-catching intro to the music, costumes, and character accents. They’re so meticulous, in fact, that these details are spawning endless fan theories, as viewers dissect and discuss each moment into oblivion. Even the Harfoots are subject to this treatment, recently spawning a very unexpected theory about their distant descendants.

The relationship between Elrond and Durin collects new fans each week, as Rings digs deeper into the close bond that ties these fairly-opposite characters together. The latest episode only reinforced this more, as it gave the pair even more screen time with which to win viewers over. Legolas and Gimli are great and all, but Elrond’s loyalty to his gruff friend is genuinely touching, as is Durin’s clear love for his gentle elven companion.

An unpopular theory sparks debate about the Harfoots’ place in history

Theories about several members of the Rings cast have been littering the web for weeks, but the Harfoots have largely been left out of the ceaseless speculation. Up until a recent post to Reddit, that is, which posed a wild theory about the true descendants of the Harfoots. Based on several aspects of their behavior over the show’s run so far, one fan thinks they’re actually the ancestors of a very different Tolkien race.

The Rings title sequence has already prompted plenty of debate, with viewers raining both praise and criticism on it. It’s only become more popular as the show’s first season edges past the halfway point, and fans find more and more nods to Tolkien lore in its captivating sequences. The entire opening is based around a number of indelible Middle-earth details, using the shape of music to create both an ambiance and a captivating world for viewers to enjoy.