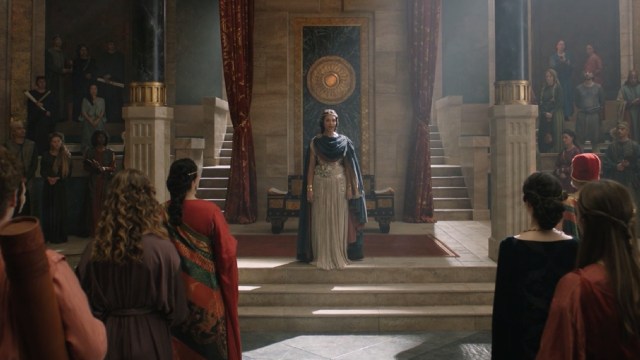 Toxicity continues to reign supreme on a number of pages dedicated to The Lord of the Rings: The Rings of Power. Forums formerly dedicated to fans of the series — and the content that inspired it — have since become overrun by trolls, prompting one fan to remind them of the early response to Peter Jackson’s Fellowship of the Ring. It turns out people are always a bit leery about Tokien adaptations — even Tolkien himself.

Even the unceasingly negative response from haters isn’t enough to leech the joy from most viewers’ experiences, thankfully, and a wave of fresh, positive pages are providing a home for fans of Amazon Prime’s take on Middle-earth. Here, viewers gather to discuss theories, post memes, and rain praise on the show’s most captivating moments. Queen Miriel’s wardrobe is this week’s most eye-catching element, prompting several appreciation posts.

Tolkien’s own words come back to haunt Rings detractors

As the ceaseless debate around Rings continues to rage on, fans of the series are leaning on Tolkien’s own words for support. But that’s not to say the man would support Amazon Prime’s vision of his world. Quite the opposite, in fact. His response to a long-forgotten attempt to adapt his books indicates that Tolkien would have hated Rings and Fellowship in near-equal amounts. Can you imagine the 2000s trilogy without those horrifying Nazgul screams? If Tolkien had his way, these details — and so many more —would be absent from the beloved films.

The visuals in Rings of Power are one of its few near universally-praised elements, and for good reason. The show’s sky-high budget allows for it to feature some truly stunning vistas and eye-catching costumes, but a recent addition is beating out its peers. Queen Miriel’s stunning armor took center stage in the show’s most recent episode, dazzling fans with its intricate and gorgeous design.

Viewers point out similarities between early reactions to Fellowship and Rings

In yet another attempt to push back against the hordes of detractors hurling hate Rings’ way, one fan is looking a few decades to the past. They poured over early 2000s IMDb reviews of Fellowship and noted the clear similarities between those long-ago criticisms and the current reaction to Rings. In doing so, they helped reinforce the long-held belief that Rings will shine all the brighter in the long term, once its story has had time to properly build.