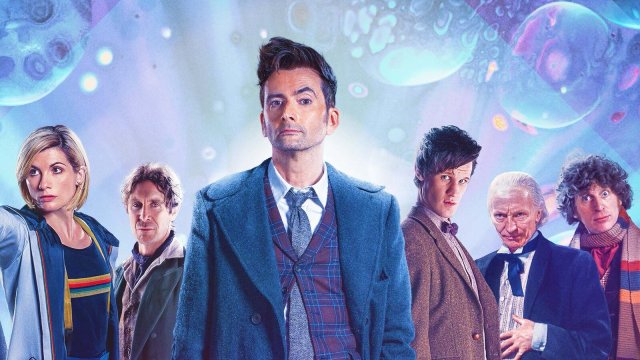 Image via BBC Studios
Review of:

This Wednesday marks a very special day for sci-fi fans as it just so happens that it’s Doctor Who Day. Yes, 59 years ago today, the TARDIS first appeared on our screens, changing the shape of television in the process. Thankfully, we’ve been treated to some exciting news over in the Whoniverse to mark the occasion. Meanwhile, The Rock comes clean over the real best part of Black Adam while an attempt to defend J.J. Abrams backfires in the most spectacular way.

With Nov. 23 serving as the 59th anniversary of Doctor Who, the BBC has been spoiling fans something rotten with crossovers aplenty. As well as unveiling a special image featuring every incarnation ever, we also got a heartwarming meeting between Ncuti Gatwa and Peter Capaldi. But the best gift is absolutely the announcement of Doctor Who: Once and Future, an eight-part audio series releasing in May 2023 that will star David Tennant, Christopher Eccleston, Tom Baker, and more. It’s about to be an amazing 12 months to be a Whovian.

One thing you can say about the Rock is that he’s not afraid of saying it like it is. After coming clean about how Black Adam has been embarrassed by Black Panther: Wakanda Forever at the box office, Dwayne Johnson has now admitted that he’s not the best part about the recent DC blockbuster. Just as the fans agree, he thinks the film’s best performance is Pierce Brosnan’s turn as the wise sorcerer Doctor Fate. If anything about this movie deserves an Oscar, it’s the former James Bond actor.

J.J. Abrams proves to be indefensible as debate over the director’s movies (lens) flares up

In spite — or, more accurately, because of — being the man who revived both Star Wars and Star Trek, J.J. Abrams is perhaps the most controversial director working in genre cinema today. And that’s something that’s been proven in abundance by an attempt from one of his (few) loyal fans to drum up some support for Abrams on Reddit, only to instead inspire a barrage of renewed criticism as his dissenters laid into J.J. yet again for the likes of Into Darkness and Rise of Skywalker. Welp, looks like they Lost that battle.

Most of Terry Gilliams’ oeuvre is made up of acquired tastes, but one of his films that’s proven to be enduringly popular is 1995’s 12 Monkeys, perhaps because it’s become strangely relevant in recent times. Starring Brad Pitt and Bruce Willis, the film sees a convict sent back in time to discover the origins of a man-made virus that’s ravaged the Earth. On top of spawning a recent, and surprisingly high-quality, TV series remake, 12 Monkeys is climbing up the monkey bars of the streaming charts this week.

For those of us stuck time traveling the normal, boring way, one day at a time, turn back here tomorrow for more of the latest sci-fi news.