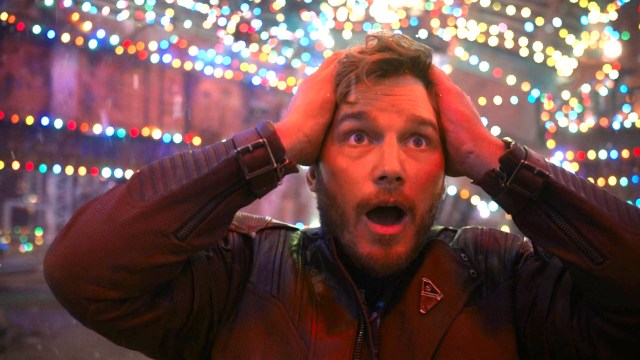 The Guardians of the Galaxy Holiday Special has finally arrived to truly kick off the holiday season, delivering a goofy and heartwarming story about the true meaning of Christmas. The core of the story is Drax and Mantis making an unscheduled trip to Earth to get the perfect gift for Peter Quill. He’s spent the last few movies singing the praises of his hero Kevin Bacon, so what would delight him more than getting the famed actor as his new toy?

Somewhat predictably, Peter isn’t happy about his buddies abducting Bacon, and once Mantis’ mind control has worn off, he’s terrified at suddenly being on an alien world surrounded by talking raccoons (sorry Rocket) and plant men. Bacon is clearly having a lot of fun playing himself, but especially when he commits the blasphemous act of mixing DC into the MCU.

This isn’t the first time the MCU has referenced the esteemed competition, as Eternals dropped some previous DC nods. However, Bacon going so far as to do the Batman voice in the MCU is sending fans nuts:

Nothing good can come from Batman being in the MCU!

Let’s hope the DCU repays the compliment at some point:

If Batman really is a comic book in the MCU, then maybe some of the darker heroes may even be inspired by him. Real-world corporate rivalry means we’re not getting anything more than these fun nods for the foreseeable future, but with the multiverse popping the cork on crossovers we never thought would happen, maybe one day in the distant future they’ll finally break the glass on a DC vs Marvel movie.

Hell, why not bring the crazy Amalgam universe to the big screen and get us some Dark Claw (Wolverine x Batman) action?