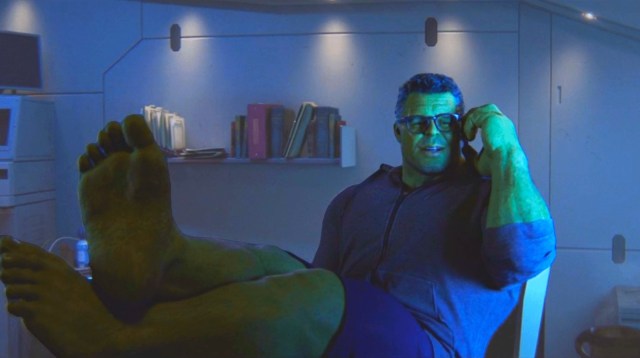 Bruce Banner fans got a generous helping of Mark Ruffalo as the Incredible Hulk in the first episode of She-Hulk: Attorney At Law while he helped Jen get up to speed with her new powers. However Banner promptly departs from the series in the middle of episode two, and is last seen blasting off into hyperspace aboard a ship.

So where exactly is Bruce off to? A Reddit thread kicked off to discuss the theory, author u/wo100r started the conversation with this interesting take.

This theory suggests the big bad wolf Banner goes toe to toe with on Asgard during the events of Thor: Ragnarok has acquired the powers of a Hulk after coming into contact with Banner’s blood in a similar fashion to how Jen gained her powers. The beast fell from Asgard during the film, and is now rampaging through Sakaar.

However, this theory quickly has a few holes poked in it.

Granted, Fenris is no ordinary being and it wouldn’t be overly far fetched to consider that the beast can metabolize gamma radiation, but regardless, an alternate theory popped up which alludes to a potential setup for Planet Hulk. The location of Sakaar remains the same, the reason for his visit differs.

We know that time moves quite differently on Sakaar, considering during Thor: Ragnarok Loki only arrives in the city only moments before Thor, yet Loki manages to establish himself at the right hand of the Grandmaster, weeks before Thor arrives on the scene.

With this time dilation in mind, it’s probably safe to presume that Banner was on Sakaar in Hulk form for a good few years, perhaps a regular human lifetime. That’s a long time off screen, and it’s worth considering Banner conceived Skaar in that time period, hence the setup for Planet Hulk and World War Hulk beyond that.

While Bruce has run off to who-knows-where in deep space, fans back on earth continue to eagerly await the arrival of Daredevil in She-Hulk: Attorney at Law, which is still dropping new episodes weekly on Disney Plus every Thursday.