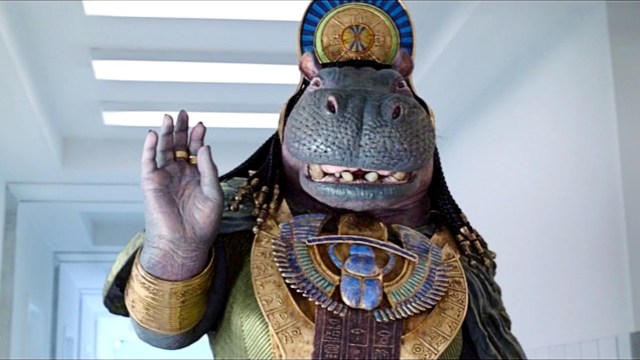 Apparently, superheroes are old hat by this point as the MCU is currently obsessed with the gods of the Marvel universe instead. Moon Knight just introduced the Ennead of Egyptian mythology and next month’s Thor: Love and Thunder is set to throw even more deities into the mix, too, as Christian Bale’s Gorr the God Butcher wages war on the franchise’s divine beings.

Unsurprisingly, it turns out that the makers of Moon Knight had to coordinate with the minds behind Thor: Love and Thunder in order to check that the Taika Waititi movie wasn’t hogging all the gods. While speaking to The Playlist, showrunner Jeremy Slater praised Marvel for allowing the show its own standalone corner of the MCU. However, he did admit that he had to have “extensive” conversations with the Thor 4 crew to make sure the two projects weren’t stepping on each others’ toes.

“Marvel was great about giving us our own little corner and our own little space and saying, ‘O.K., the Egyptian gods can be their own thing,’ especially since we’re only seeing, I think, three of them on screen over the course of this story. But we did speak extensively with the producers of Thor: Love and Thunder just to find out what they were doing with gods in their story, to make sure that we weren’t going to be contradicting anything. At the time, all of the release dates were still up in the air, and we didn’t know if we would be coming out before Thor: Love And Thunder or following up Love And Thunder.“

This isn’t the first time Slater has talked Love and Thunder crossovers. The EP previously revealed that some dialogue would’ve established that Moon Knight was happening concurrently with the events of the film, as the Ennead would’ve discussed hearing word of Gorr’s attack on other gods. However, these lines were ultimately cut. That might be because, as Slater says above, there was so much uncertainty over the release dates.

By the sounds of it, then, fans shouldn’t expect to see Khonshu or Tawaret in Thor 4 as the two parties decided to steer clear of any confusing cross-pollination. If that’s the case then that’s a bit of a shame as Love and Thunder has the perfect way to call back to the Ennead, thanks to the introduction of Omnipotence City, the base of the Parliament of Pantheons and a hub for all kinds of gods.

Still, at least we’ve got Russell Crowe’s Zeus to look forward to meeting when Thor: Love and Thunder premieres on July 8. In the meantime, Moon Knight season one can be streamed on Disney Plus.