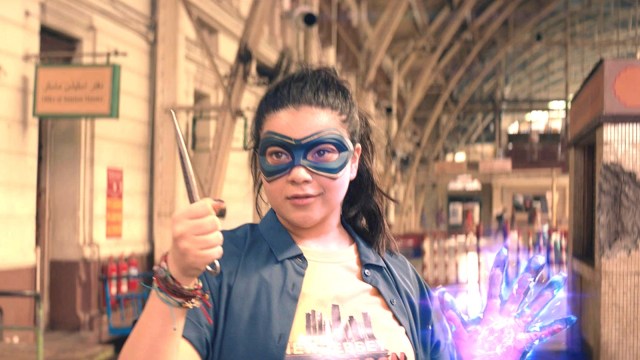 Ms. Marvel is wrapping up its initial season today. It concludes with a tease of future story developments in the Marvel Cinematic Universe and one about Kamala Khan and the differences she has from the rest of her family made Iman Vellani laugh lots.

In a new story published on Marvel’s website today, the actress says she was terribly excited so filming the final take between her and co-star Matt Lintz took a while. In the moment, he uses a specific term alluding to key characters and Vellani really loves it.

“It took a really long time to film that scene because any time Matt would say that word I’d start giggling. I think we got the one take. The one you see in the episode is one of two that we got where I was mildly serious. It was really, really, really difficult. I think we have so many outtakes of me just breaking because I was so excited and giddy over this.”

The piece also notes everyone else in the cast was excited for the word to be used. Crewmembers were even tickled as well and co-star Matt Lintz, who plays Bruno Carrelli says he and Vellani do not know what will happen next at all with this development.

“So many people have been waiting for this. There have been so many people excited about it. It’s even cool for me and Iman as viewers because we don’t know what’s going to happen. [This is] something that the fans, and me included, are so excited to see.”

Those curious about the exact word can go to Disney Plus now to watch all six episodes of the show or go ahead and read some spoilers.